In one of my recent posts I commented on my caramello koala fetish. (Well, actually I think I’ve talked about the aforementioned fetish a number of times… but let’s not go there!). However, I recall recently posting a picture of a packet of caramello koalas, to demonstrate the fact that I had – actually eaten all twelve small koalas… most likely in one sitting. (A ‘virtual’ confession of sorts!) 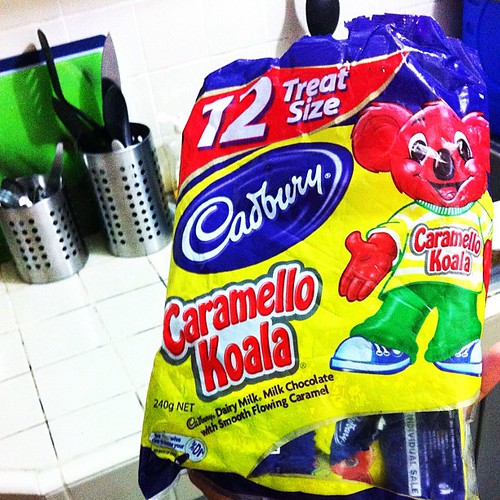 One of the comments I had on that post was from someone overseas who commented that the candy / lolly / chocolate looked interesting and it occurred to me (for the first time) that these treats must be an Australian-only thing. So today – because I don’t usually post in this blog on weekends – I’m going to give those who haven’t yet been exposed to the caramel-filled chocolate yumminess a lesson in caramello koala consumption.

The first thing you need to know is that you can buy small koalas individually, or in packs of 12 (my personal fave). In addition, you can buy double koalas and larger single 40g koalas. Which… as it just so happens… I did this morning. EGAD!

I know I know… I can no longer claim to be chocolate free, but I last a couple of weeks, which surely is an achievement for me (of late, anyway). But today I was up early and on my exercise bike (which is being collected today – note there will be no tearful farewells!) and did some grocery shopping and called into the local library – all before 8.30am. While at the grocery store I ‘happened’ to go down the chocolate aisle and yes… they were beckoning me…. ‘Schmiet, Schmiet come to us…’ they were saying…. So who was I to turn them down?!

As I breakfasted on my koalas and diet vanilla coke I decided to snap a few photographs of my experience to share with my virtual buddies who do not know the joy of my most beloved chockies. Sadly I am a crap photographer, so only one of the below photos is mine, with the rest discovered on Flickr (see, someone else also has too much time on their hands).