Sometime this week I was struck by a craving. I can’t even remember what set it off, and I am most definitely not pregnant (immaculate conception anyone?).

When I was first diagnosed as coeliac, about 5-6 years ago I grappled with food choices and options. I was never much of a bread-eater, so that wasn’t an issue for me (but is for SO many coeliacs). Breakfast, however, has remained a bit of a problem. I may well offend the dairy industry when I admit that I’m not a big lover of milk and for that I blame the Queensland Government’s 1970s policy of making school children drink little bottles of milk every day at morning tea. It was compulsory and we weren’t even allowed to add Quik/Milo or the like. It was always hot and smelly and I shudder just thinking about it, even now. Incidentally, at the time of my coeliac diagnosis I also discovered I am lactose intolerant but given that I was grappling with the no-gluten issue AND the fact that I’m not a big consumer of dairy products, I have always ignored that fact). 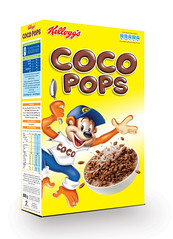 Now, I must admit to a yet another unusual obsession at this point. Growing up (and at several times in my 20s and 30s) I loved (loved, loved) cocoa pops, with milo sprinkled over them and hundreds and thousands. No milk or liquid, just dry chocolate goodness. Yum, yum. Of course I would NEVER eat that now (but mainly cos of the coeliac thing) but over the years it was a breakfast that I loved.

Other than the coco pops I’ve never been much of a cereal lover, but eventually I discovered a couple of edible gluten-free cereals… some version of corn flakes, as well as rice flakes and rice bubbles. There is much debate over whether oats have gluten, so to be safe I stay away from them (and faux muesli).  I couldn’t , however, dream of eating that cereal dry so I ate my gluten-free faux corn flakes smothered in a small tub of yoghurt (low fat Vaalia Lemon Creme being the preferred option!). It was easy to prepare and it tasted good (only rivalled by the same yoghurt eaten with meringues and tins of caramel – mmmmmmm! – but again something I would never eat now, well, not at this very point in time!) and the cereal/yoghurt combo became the way I started each day.

But I noticed something. I was always hungry not long afterwards. Although the cereal has added psyllium (which is apparently a good thing) it isn’t very filling. I suspect it is a high GI cereal option. Calorie-wise it isn’t too bad, but at some point over the past few years, I have switched to a more protein-laden breakfast: baked beans & and egg; gluten-free toast with low fat bacon & an egg. Etcetera. And I have been having variations on that for a few years. Since I’ve started this weight-loss program, on days I exercise early I have the baked beans option (being slightly higher in calories), otherwise I have the toast option.

But this week, the cereal/yoghurt combo popped unwillingly into my head. I know it isn’t as healthy as something higher in protein or fibre; and I know it isn’t as filling as it should be, but (on my early grocery shopping expedition today) I decided to allow myself to buy some Freedom Foods gluten-free corn flakes and Vaalia Lemon Creme yoghurt. And I breakfasted on that after pilates. For a cup of cereal (which is a good-sized helping) and a small tub of yoghurt, my calorie intake was 354. Higher than either of my usual options, but a nice (not-too-unhealthy) treat. Of course just a few hours later I am hungry already.

Normally on weekends I do the ‘brunch’ thing as I eat breakfast quite late and so don’t need lunch. Today I may need a snack or some lunch. But either way, I’m not overly concerned about my breakfast choice. As long as I mix it up a bit and stay within my calorie limits I should be fine. I mean, it’s hardly like I am eating coco pops (with milo and hundreds and thousands!). Although….