Today was a first for me, as I went to a boot camp organised by another participant on my weight loss program. It isn’t like I haven’t done group fitness before: 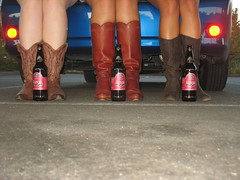 But today’s boot camp was a big thing for me as I’m coming from a less-than stellar level of fitness. As I’ve mentioned here MANY times I was doing nothing before I started this weight loss program. I was getting shin splints when I walked and my hip ached constantly. I’d even stopped going to pilates. As it happened, I’d done nothing AT ALL for about 8 weeks when this program kicked off. In preparation, however, I hired an exercise bike – with a plan to use that for my cardiovascular exercise until I drop enough weight and get fit enough to do other things. I also restarted my pilates lessons the week the program commenced (my version of core and strength training).

As of today I’m 9.2kg down – in almost exactly five weeks. I’m happy with that. I’m not burning the same number of calories as those who can exercise harder and longer, but I’m doing SOMETHING. Which is more than the SFA I was doing before.

A couple of weeks into the program I braved the Saturday morning boxing and cardio group class in a neighbouring suburb, along with 25-30 other program participants; and even went back for seconds a fortnight later. I thought that was a big deal, given where I was coming from. But I’d avoided the boot camps. With the boxing classes, I’m okay with the boxing bits, it’s the running and fitness stuff that kills me…. so the idea of going to an entire session that’s built around running and cardiovascular exercise seemed inconceivable. 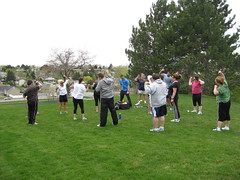 But I did it! Today! I ummed and ahhhed a bit and didn’t sign up until the very last minute. I wasn’t sure if I could even move for 90 minutes, let alone do ‘stuff’ for that amount of time. But it was okay. The boot camp was in a nearby suburb, so I liked the idea of meeting local program participants AND I must admit I didn’t get to walk this week, so my other 4-5 days of cardio exercise have involved interval training on the exercise bike. And frankly… I am a bit OVER the bike AND my butt hurts!

Of course I arrived at boot camp as everyone was starting their warm up run. Yes, that wretched swear word; R-U-N! I made it across the paddock – about one quarter of the run – before I had to stop the ‘shuffle-I-called-running’. But I walked the rest. And throughout the session the trainer was very sympathetic to my fitness-challengedness. I tried to do as much as possible; I staggered when I could and walked when completely stuffed. The 90 minutes went amazingly quickly and – despite my fire engine red face – I quite enjoyed it. On top of that, everyone was so supportive and welcoming, so I didn’t feel too out of place or uncomfortable (given my level of unfitness). I’m not sure how often I can go, but I will boot camp it again!