Kath, from The courage to start and another participant on my weight-loss program, has set her second blogging challenge for program participants.

She notes (as have I on a couple of occasions) that this program’s online community can sometimes be a bit overwhelming for young players (and yes, I know I’m 43 years old; but I do feel 23 most of the time). Similarly she acknowledges that it’s hard not to compare yourself to others on the program. When, in reality, our goals are all quite different. 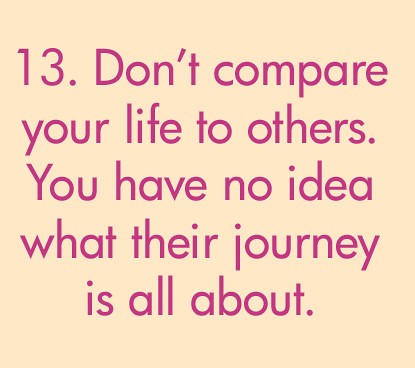 She agrees that there are the up and at ‘em type, who are doing several hours of exercise a day and perhaps are already running and exercising regularly when they start the program. And then, there are those who are struggling to get started. HELLO, pick me! I mean, I know I’m hardly a dieting virgin. Before starting this program I was well-versed in the art of diet and exercise, but I wasn’t sticking to any diet or doing any bloody exercise. So, for me, even the beginners’ exercise plan on this program was overwhelming.

I’m constantly comparing myself to others. Last round I was shocked when other first-timers were already running, or doing several gym sessions a day. Others were trialling new recipes and undertaking mammoth tasks for their monthly milestones. All of which made me feel like an underachiever: like a failure. I mean, I was pleased to last 30 minutes on an exercise bike. But I wondered, should I too be running? Should I be climbing mountains? I hate running and I hate hills (and get absurdly obsessed and stressed about either), but perhaps my dread of them was a sign I should be forcing myself to confront those demons.

But then I stop and wonder. Do I have to run? Do I have to climb mountains? Do I have to lug tyres and sandbags about? Am I not fit and healthy if I don’t? Is it enough to be able to go on long walks, or do a Zumba class?

Kath’s challenge this week requires us to paint her a picture of what being healthy means specifically to us, whether it be: running marathons; keeping up with the kids; or being able to garden.

The interesting thing for me about this challenge is that when I think about ‘being healthy’ my focus is ALL superficial. It’s about the aesthetics. It’s about how I want to look. How I want to be perceived by others. Sadly it isn’t (really) about being healthier, although I realise it should be.

Before starting this program my blood pressure (even on medication) had been excessively high. At one point in particular I’d run out of my medication and so went without for a week or so (as you do – if you are me) and when I went to my doctor to get a new prescription it so was high I could have been hospitalised. Note to self: be better organised!

But, after starting this program, dropping some weight and rarely indulging in alcohol, my blood pressure (still with medication) was almost normal. Something it hadn’t been since I’d dropped 20+kg almost 10 years ago.

Despite this and three (!) autoimmune diseases, any health issues I’ve had haven’t been ‘real’ to me. I don’t know why.

Rather, it’s felt like my body was communicating its unhappiness in other ways, all of which had more of an impact on me. Prior to starting this weight-loss program I felt constantly bloated. My stomach felt uncomfortable and I was having difficulty taking deep breaths – presumably because my belly (and whatever’s in there) was getting in the way of my lung capacity. And then there was my level of fitness. I’ve previously commented on the fact that climbing the 45 stairs to my railway station each morning nearly killed me. I’d reach the top unable to gasp for air and look around, hoping that no one witnessed my shame.

I do realise however, while I’m not as conscious of my ‘health’ as I should be (and deserve to be), I am conscious that I need to be healthier. And for me I guess that means (in no particular order):

So… there you have it. It’s a bit of a brain dump, but it was interesting to note that I didn’t write that I want to be able to run a marathon, or even 5km, or that I even want to WANT to run. Perhaps once upon a time I still yearned for my once-athletic self to be rediscovered, but at the moment it’s not high on the agenda. Sadly there isn’t a lot on the list about my ‘actual’ health, in the way that I would define health and wellbeing, but I guess that I’m assuming that IF I can do and be all of those other things, then my blood pressure or any other ailments are under control. Happily though, it seems that my perception of healthy is fairly doable. So… I too could be healthy!