The lack of sleep-is-linked-to-weight gain issue has been in the media again. And no, it’s not just because many insomniacs get up and demolish a tub of ice cream in lieu of sleep. Rather it’s about the effect that the lack of sleep has on the brain and the way it responds to stuff – like temptation.

I cannot remember the last time I was asleep before 2am. Fortunately as I’m not working (other than for myself at home) this hasn’t been a huge issue. However, it’s really pissing me off. Last night at my mother’s – while lying there until about 3.30am I wondered if this whole ‘6-8hrs of sleep straight’ thing was really a necessity. Perhaps I could become a napper.

I actually nap well (which I know impinges on my sleep patterns). As I contemplated getting up, opening my laptop and hitting the vanilla diet coke I decided I could probably function quite well on several 2-3hr naps each day rather than sleep in one entire burst. That way the individual sleeps would be less important and I wouldn’t have to lie there stressing about my inability to doze off. 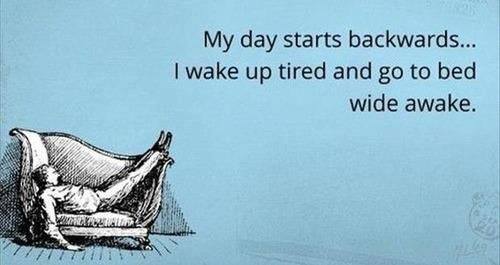 I’ve always been a bad sleeper. I tend to expect it and usually plan for it.

Sensibly and maturely I often rely on red wine to help me sleep – occasionally having more than my 2 standard glasses in attempt to doze off within 2hrs of hitting the sack.

The odd sleepless night doesn’t bother me – though was more problematic when I had to be on a bus or train at 7am the following day and function in public for 10hrs.

However it’s particularly grating at the moment as I haven’t actually slept well or properly for about a month.

I blame my mother. Well… in all honesty it’s not exactly her fault but you may recall I’ve been staying at her place while she’s been recovering from a hip replacement. Initially I struggled to get comfortable in the different bed and different surroundings. A ticking clock pissed me off for several nights until I removed the battery.

My ‘bedfellow’ (in the room down the hall) didn’t help. I’d listen to see if she was sleeping or if she was on the move and needed to get out of bed. However, as she was also sleeping badly we had many a 2am conversation.

Last week I spent two nights at my own place – neither night I slept before 4.30. (At which point you wonder if it’s worth even trying to sleep!)

At her place in between she was up and we were chatting. “It’s 2 o’clock,” she said. “Oh that’s okay,” I replied, “not too late then!” I explained that I was feeling quite comfy and happy just lying there. Of course the following night I felt completely different – uncomfortable and unsettled when 2am came around.

I’m mostly at my place this week, which is probably better for mum as she can get up and make a cup of tea or a hot lemon drink and have a read if I’m not there. And I can head to the bath or write if I can’t sleep.

The insomnia thing isn’t new to me. As I’ve mentioned in previous posts, I know what I should be doing and I’ve tried them all. Hot milk before bed, warm bath before bed, no computer before bed. I lie there for a while before I eventually get up. I have a notebook near my bed in which to record my bursts of inspiration, but… nothing really works. I try not to nap during the day but then get so tired by 4pm I literally fall asleep. I try getting up at the same time each day, but with few commitments it’s hard – particularly when I’m so tired on waking.

It’s occurred to me before that – when I lie down to sleep – is the only time all day my brain stops processing what I’m doing (I’m sure others are the same). Suddenly it’s momentarily empty of ‘stuff’ and free to wander.

I’m undoubtedly at my most creative when I lie down to sleep. Many a daytime nap has been thwarted by inspiration. The notebook on my phone contains pages of blog post ideas – many of which barely make sense in the light of day. I go to bed and I think and think and think. In fact, as I get more tired my thinking becomes more frantic and less rational. Even I cannot make sense of seemingly sensible ideas which pop into my head. I’ll be midway through a thought and realise I can’t remember how it came about. Scenarios run through my head with no meaning at all.

Like I said – I have very few daytime commitments at the moment. I can write whenever. I do expect however, that my sleeplessness contributes to my lack of weight loss. I use vanilla diet coke to get me out of bed each morning and sometimes plan exciting snacks to keep me enthused and energised. My morning exercise has suffered; but it’s more the lack of routine which worries me. I could happily live forever sleeping between 3-8am with the odd nanna nap during the day. But, it kinda feels wrong and I don’t know why. So for whatever reason I’m aiming to get back into what-is-for-most-people a normal routine. Sleep by / at midnight and up at 7am. Fingers crossed.

Are you a good sleeper?
Do you need routines or regular sleep patterns?