I’ve talked on and off over the past 3-4 months (since taking a break from work) about my lack of routine.

I’ve always been a creature of habit. I am more than happy to eat the same thing for breakfast every day and when I was working I had no problem taking the same thing to lunch day in and day out. And… as I mentioned last week, I tend to cook the same thing week after week.

I suspect that routine and habit helps me feel in control.

But, while I have (hopefully) reined-in my previously out-of-control eating I’m still struggling to get into some sort of routine. 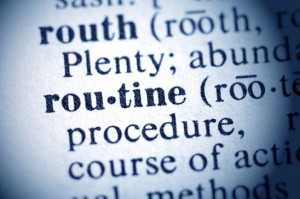 I often make a plan… But, it falls over pretty quickly. You see, it’s pretty hard to justify NEEDING a routine as I currently have very few commitments.

I’ve now spent nearly 5 months out of the workforce. Which is kinda crazy. Of course 1-2 of those months involved selling and buying and moving, then there was Christmas, but still, 5 months is a hell of a long time.

I’d always planned to start looking for some part-time work once I’d settled into my new hometown so I’ve started to monitor employment sites and classifieds. I’m not overly desperate as yet, but don’t want to get to that point.

I’m mortgage-free now, but still have hefty bills coming in.

I’ve always known I wouldn’t be able to live off my writing (unless my genius is discovered by some publishing house or magazine wanting me to regularly freelance ;-), so until then I’ll need some money to get by.

My ideal scenario would be a couple of days of work each week. Something to do with writing would be ridiculously opportune, but I won’t hold my breath. My preference is that it has NOTHING to do with my previous life. Sorting mail at the Post Office or stacking shelves would be preferable than a return to the way I lived before (which didn’t seem all that bad at the time!).

It’s strange, this lack of ambition, or perhaps I’m still secretly hoping I’ll make something of my writing. But other than that, I’d be kinda happy just ‘getting by’; making enough money (from my job and writing) to pay the bills and have a few treats now and then. It occurs to me that if ‘this’ is my life, then that’s okay.

Meanwhile, when I find a job and my free-time is more limited I suspect I’ll need to focus more on routines. Plus I’ll actually need to get to work and stuff! Until then I’ll make the most of my life as it currently stands.

Do you need routine?
Have you had a break from work or had to resettle into the workplace?

* I know this post isn’t exactly health / fitness / wellness related but it does focus on lifestyle issues. Plus it’s my blog and I get to write whatever the bloody hell I want to. Oh, and it’s very vaguely a two-parter with a post in Debbish focusing on my writing aspirations (and getting into a writing routine!).