It’s finally upon us. After weeks of preparations and discussions; and after binging on thousands upon thousands of calories of ‘foods-I-won’t-be-able-to-eat-once-I-start-dieting’ (or that could just be me), participants – such as myself – kicked off Michelle Bridges’ 12 Week Body Transformation challenge today. 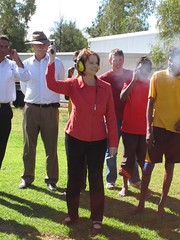 I had planned to exercise before work. But once in bed last night I lay there and lay there and lay there and lay there. I contemplated getting up and doing something but stuck it out and sometime, after 1.30am but before 2am, I drifted off to sleep. When my alarm went off I was most disturbed because, I was not only tired, but in the midst of some lovely dream which involved some gorgeous man who was besotted with me.  Naturally, committed as I was to 12WBT(!!), I reset my alarm to give myself an additional 45minutes of sleep, promising that I would (obviously) exercise after work instead and hoping that the man of my dreams would reappear once I closed my eyes.

It didn’t work. Guilt set in so I got up anyway. Although it was about 15mins later than planned, I got on my exercise bike. I recall laughing when my mother used to struggle to ride an exercise bike for even short periods of time. And I thought that my 20mins of interval training this morning would be a breeze. It wasn’t. I was panting and puffing. By the time I did 23mins (including warm up and warm down) I was red-faced and drenched with sweat (and remained hot and sweaty, despite my shower, for several hours).

But, it’s true… I felt great afterwards. Virtuous. Healthy. Relieved. I still had music blaring in my ears as I prepared my breakfast (to eat while in the bath) and was energetically dancing away as I prepared for work. Of course I live alone so no living soul was forced to witness this spectacle.

And, although it is only day 1, so far so good in terms of my calorie intake. I breakfasted on 281 calories; lunched on 246 calories and consumed 326 calories at dinner. I’ve never been a very good snacker. For me a snack comprises chocolate or chips, rather than nuts or fruit. But I do intend to make an effort. I had intended to eat a mid-morning snack today but my morning at work was thrown into a tailspin by something so before I knew it, lunchtime was upon me.  My lunch was a two-parter, so I had half of it early and the rest mid afternoon.

Finally I have some yoghurt and intend on eating some of that before bed. Nevertheless, it should only take my calorie consumption up to about 1000 calories, and I’m happy with that. I wonder if it’s like Weight Watchers and I can ‘bank’ some calories in case I go over another day. I hope not to need them but I don’t want to be unrealistic.

There have been a few lessons for me already. Because I am not faithfully following Michelle’s program I struggled a bit with dinner. I had gotten some fillet steak out, but was then loath to cut it up into slices for a stir-fry. I usually eat it grilled lightly (medium rare) with an enormous mound of potatoes. And perhaps some nice red wine. But not tonight. There are a few recipes from the program that interest me, but I also have a pile of Weight Watchers recipe books that I must trawl through because I was most successful on that program when I kept varying my meals and trying new things.

Tomorrow morning I am returning to pilates after 8+ weeks away. It requires an early start and I hope I do better than today. It’s a small group reformer class (8 people) and at 45mins is quite time-efficient. I just need to remember – when I am about to hit the snooze button and blow off my $25 paid in advance – how good I will feel afterwards. I may not dance about to Usher’s ‘More’ as I’m making my breakfast but it will give me another day of a slightly-smug glow, knowing I am on the right track.