Happiness doyenne, Gretchen Rubin, often writes about the concept of abstainers versus moderators.

My mum, for example, is a moderator. She can easily open a packet of biscuits and just eat one or two. She keeps all sorts of exciting foods on hand in the event of visitors – and remains immune to their allure. I have friends who are the same. Chocolate will remain in their fridge for days or weeks. Packets of chips or crackers hang around until bored in their pantry.

I’ve mentioned the notion before and believe that – on the whole – I need to be an abstainer.

Even though I’m trying to not-diet and put boundaries and parameters around my food, there are certain things I’ve placed off-limits.

The logic behind this probably makes sense only to me. For example, I can mostly eat whatever I want for meals and snacks, but I just can’t buy my trigger foods (chocolate, corn chips, rice cakes and so forth). If I go to someone’s house and they have them, that’s fine. I can partake, but in essence if they’re in my house I KNOW they will be eaten in a binge-like manner (and perhaps set off something worse). No question about it.

I know I need to be an abstainer because – quite honestly – I just can’t control myself around certain foods. And sometimes bingeing comes as a relief because I KNOW that after days and days of indulging in as much as is humanly possible, the infamous lightbulb will glow and I’ll feel compelled to turn my life around, going on the-diet-to-end-all-diets. Been there, done that, have the t-shirt!

When it comes to ‘binges’ or the notion of self-control, I’m far ‘better’ than I once was. Just a few years ago I could not keep flour or sugar. IF I had a combination of both (even if I had flour and sachets of sugar / sugar cubes) and I had butter, eggs or milk on hand, I COULD make biscuit batter. And I’d make it over and over again. Until the ingredients were gone. And unless I was resolute… I’d buy more.

Back then, my only option was to stop buying flour.

I now have flour. I probably even have sugar. But… my binge behavior is obviously improved on what it once was as I’m not likely to binge uncontrollably on biscuit or cake batter.

The thing that intrigues me is that I find abstinence acceptable with some things and not others, particularly given my ‘all or nothing’ and black/white thinking.

Going without carbs or placing other things off-limits sends me into a tailspin: the notion of deprivation makes me ponder on the point of life. In general, I am anti-abstinence.

I must confess I like that I can (mostly) be honest with myself about this stuff. It’d be nice to attempt moderation with my trigger foods and buy a bag of caramello koalas; telling myself I’d just eat one or two. But even now I know I’d eat all 12.

Twelve caramello koalas wouldn’t be the end of the world, but I’d probably go back to the store tomorrow and buy another bag. And then THAT wouldn’t be enough. I’d need more. Two bags at least. Rinse, repeat.

It seems I’m (mostly) self-aware enough to recognise when moderation is possible and when I need to abstain. So, I’ve realised it’s time to add yet another food to my DANGER FOODS list: Vanilla Diet Coke.

How many times have I given up the demon drink? Lots. 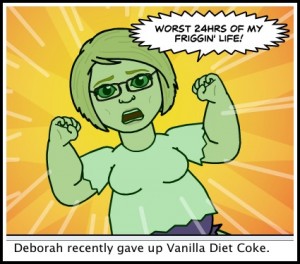 It takes some doing, but after a few days I’m okay. There’ll be occasional cravings, but I survive.

Two years ago I’d essentially quit the stuff for months, until my dad got sick and I started buying a bottle enroute to the hospital each day. Earlier this year I’d given up, until I got sick and needed a caffeine pick-me-up (OR SOMETHING) to make me feel better.

However… on the VDC front, I’ve tried moderation and it doesn’t work. I’ve ‘tried’ to stick to 500ml/day or similar, but the moment I feel stressed or need to ‘focus’ I turn to the caffeine-laden fizzy stuff.

So, if my Facebook updates or tweets sound grumpy over the next day or two you’ll know why!

Have you detoxed from caffeine or another fave substance?
Were you hell to be around?

PS. In case you’re wondering how my digital detox went; it was great. The first day I constantly reached for my phone and wanted to tweet, Facebook or Instagram stuff. I needed to tell someone things, whether it be to share funny photos or my enlightened thoughts. By the second day I was mostly used to it and actually wanted to stay away longer. Alas… the real world beckoned.