MUST. STOP. GETTING. ON. THE. BLOODY. SCALES.

Although I knew it was coming I shuddered when I opened the final 12 Week Body Transformation Challenge pre-season task (and I wrote about it here). We were required to ‘measure up’.

But I did it. Dutifully. Well, okay… a bit reservedly and a bit resentfully.

The task involved getting weighed, doing our measurements and taking a ‘before’ photo (insert dry retching sound here!).

Bizarrely I don’t break into a sweat at the idea of measurements. This could be because they mean nothing to me. I mean, I’m sure it isn’t a good thing to have a 122cm waist and recall that anything over 80cm is a problem, but for me there’s no stigma attached to those numbers. They are just that – harmless numbers.

But that isn’t always the case. I also got on the scales as required. Tentatively. It wasn’t pretty. In fact it was bloody ugly. I was even heavier than I thought (and heavier than I was just a few weeks ago). My lucky number was 129.1kg. I just scraped in under the 130kg mark. Just. At 178cm tall, that means my BMI was 40.7. Not good. According to all of the ‘charts’ I should weigh 79kg. But my own goal is 90kg. Well… frankly my own goal is anything less than I am now.

Like most people battling their weight I have long had an aversion to bathroom scales. When I was anorexic they ruled my life. I became hysterical when my mother removed them at one time and she had to go to her workplace in the middle of the night to fetch them. Later, while at University I felt sick every time I heard my neighbour’s door creak open in the morning. She had a set of scales and I used to sneak in and weigh myself while she was in the bathroom. She knew I used them, but not how often. And they had such a power over me. I hated them as much as I needed them.

Having gained weight over the years I have made conscious decisions to steer clear of bathroom scales and averted my eyes when I saw those located in shopping malls.  And the times that I have stepped aboard I have, on many occasions, been shocked at how much I’ve gained since I was last weighed. It gets to the point that I am terrified at how much I could possibly gain in a short period of time. 11kg in one month is my record so far.

But then there have been those times when weighing myself has been a requirement.  And during those times the scales have either been friend or foe. Depending on their verdict.

The last time I seriously did Weight Watchers (2002-2003) I lost about 20kg fairly quickly. I reached 91-92kg but then I hit a wall. Months and months passed and I hovered up and down. At that time I was going to pre-work Weight Watchers meetings in the city and I would be on and off the scales a dozen times the night before weigh-in and in the morning before I left home. They ruled my life. Again. It got to the point – when I couldn’t lose any weight – that I would leave the meeting in tears (and in a shitty mood), my day and my week ruined. Because of some bloody numbers. 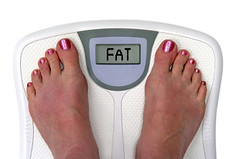 Since then I have – at times – attempted to ‘diet’ without weighing myself. I have focussed on just counting calories, drinking shakes or just eating healthily. On a couple of occasions I have noticed a change in my clothes and colleagues have commented on my weight loss. But then I’ve given up. It’s occurred to me sometimes that – given my size – for people to notice I might have lost 10+kg and so perhaps if I’d been weighing myself I might have been more self-congratulatory and more motivated to keep going. So, it always comes back to the numbers.

Tomorrow is the first big weigh-in for me during this program. Last week I’d lost 1.1kg but that was only over a couple of days. As I already posted, I was happy with that until I saw how everyone else was doing and then I was less happy.

Already I am starting to get nervous and contemplating what I can do to minimise tomorrow’s numbers. I know I’ve lost weight since last Wednesday as I’ve been on the scales several times. Yesterday morning I was 124.1 – 5kg less than my starting weight! I was stoked and it motivated me to do some lunchtime exercise given that I had skipped my morning exercise and had visitors in the evening. I was on a high all day and even skipped the egg custard planned for dessert (keeping my calories to about 1000). But then…. even though I bloody well shouldn’t ,I got on the scales again this morning. And the verdict: 124.5. WTF? Up 400g! Shit! Shit! Shit! I know it’s just fluid but what if it’s still there tomorrow?

So, again I am letting a set of bathroom scales judge me. I should be happy with the effort this week. Yesterday I posted about my accomplishments in week 1 and was mightily proud of myself. And now I let some bloody numbers pull me down. I have a terrible feeling I will be off and on all day before tomorrow morning’s weigh-in. The thing I wonder though is how much of it is my fault for jumping on the damned things so much. For example, if I hadn’t been on yesterday and seen the 124.1, I may well have been happy today with 124.5. Yet another lesson for me I guess and I need to try harder as I vowed not to become obsessive about the numbers this time around, because they are, in fact, just that. Numbers.