Perfection somehow seems like a reality possible of achieving, yet the exact opposite is true. Perfection acts as a mirage in the desert…you think  you can get to it and then revel in contentment, until it disappears before your eyes and leaves you stranded in frustration. Then, sadly, moments later we will seek it again. Search high and low in this world and I guarantee you that you will never find perfection.

Sadly, I believe all of us know perfection does not exist, but still continue to search it out like some sort of Holy Grail. We focus on what lacks in our bodies, our wallets, our lives, our families, our relationships, etc In the process of emphasizing the missing pieces, we create bigger and bigger holes in our own self worth and happiness. Our simple act of desiring perfection ends up leaving us with even less of what could be called a “perfect” life because we miss out on life. How’s that for irony?

The quest for perfection acts as a drug. We want more, more, more to go higher, higher, higher but in reality we simply crash and burn with less and less. Less hope. Less strength. Less love for ourselves and others. Less energy. Less perspective. Less…until eventually we scramble for any scrap that can signify purpose or joy in our lives. The quest for perfection kills souls.

To break free from the chains perfection binds us in, we must not only recognize that perfection does not exist but also that we don’t even want it. Imagine the vibrancy life would lack in a world of perfection. Our pains make our joys brighter. Our weaknesses make our triumphs over them greater. Our unique physical attributes make us all the more beautiful. The areas of our lives that we may wish to improve on make the areas we take joy in all the more sweet. The absence of perfection gives us a meaning to live. With perfectly sculpted and manicured lives, the passion and purpose for going out and experiencing life would diminish. What’s so perfect about that?

In what things do you try to seek perfection? Why do you even want it? How does desiring perfection actually hurt that area of your life? What would letting go of the hope for perfection do for you? Look for more reflection from me relating to this topic in this afternoon’s post. Writing this today was a mild reality check/slap in the face for me as well. 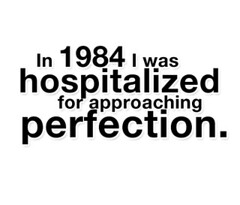 I don’t know where the hell this came from. I wasn’t a ‘star’ as a kid. My brother was. Excellent student (top high school result you can achieve in the State), in Australian basketball squads until he got injured in his early 20s, invited to Pan Pacific athletic tournaments because he was a talented shot-putter, high jumper, triple jumper, discus thrower and javelin thrower and placed in the top 3 in the State always. And… well, you get the point. And, don’t get me wrong. I didn’t grow up jealous. I grew up proud. My family traipsed around the State to his various basketball and athletic championships. At 3yrs and 10 months younger I used to dress in his team’s colours (well, while in primary school, that was). My parents and I were his biggest fans.

I don’t recall feeling like a second class citizen in our family. Indeed, I felt loved as well. I didn’t feel talented though. In fact, I still remember (once I became anorexic and started training basketball a lot myself) my father’s surprise at how good I’d become. My family watched my State titles in my final year of high school when I made the State squad and suddenly I felt like the achiever in the family for a change. At around the same time (ie. when I was anorexic) I went into a modelling competition and did pretty well and did some local TV commercials. For the first time in my life I was the star. But rather than bask in that glory and gain confidence, I became more and more fearful of failure.

I also started playing tennis at the start of my final year of high school (initially just for the additional exercise during basketball’s off-season) and my father and I practised most days. I started playing in a low grade but went through undefeated. I was upgraded the next season, but I quit. I used to get myself in such a state that I’d be praying for rain so I didn’t have to play. IN CASE I LOST. My father didn’t come and watch me, so it wasn’t as if I was worried about disappointing anyone else (see, I have analysed this to death over the years). My fear of losing became so great that I couldn’t do it any more. I was supposed to go away for some representative games, but pulled the plug. It seemed team sports were do-able for me, but individual sports placed too much weight on my seemingly fragile shoulders.

After commencing University I started seeing a therapist. In retrospect he wasn’t the right therapist for me. (A Freudian, so we spent much time talking about my childhood – which was fine. But he had an annoying habit of constantly writing. I would sit and wonder if he was recording my words or writing his shopping list. H used to ask me ‘what I was thinking’. I suspect what I was thinking was ‘Why the fuck are my parents paying all of this money for me to sit here and watch you write?’ But in those days I was nice and sweet and not-at-all assertive. So I’d shrug and say, “I don’t know.”) Nevertheless, we talked a lot about my behaviour. Bizarrely my perfectionist behaviour was again manifesting itself via tennis (a sport I played but briefly). At my residential college friends regularly wanted to have a hit of tennis. I could only play with my father, brother or another decent male player. Because if I lost to them it was okay. They were stronger or more athletic – generally. But if I lost to another woman, or a friend, or someone who I should be better than; I didn’t think I could cope.

At that time I’d started putting on weight and it was starting to worry me which is why I went to the Shrink in the first place. In retrospect I wasn’t even really overweight as yet but the binging and obsessive eating had started (as opposed to obsessive dieting and exercise). The Shrink’s opinion was that my anorexic behaviour had been focussed around my competitive and perfectionist nature (which is not uncommon and closely linked to the control issues I’ve discussed before). Because I became thin around the time I was seriously interested in a boy for the first time, he believed that I was dieting myself out of the attractiveness race. He believed my thinking was: If I cannot be the most attractive person, then I don’t want to compete. In his mind, I became so thin I (lost my periods, became less feminine and) became unattractive; and I was (at that time – according to him) in the process of becoming SO overweight that I was again putting myself out of the attractiveness race for fear of rejection (ie. losing).

In theory his premise is fine. I do hate losing and I do fear rejection. As I mentioned in ‘perspective’ blogging challenge yesterday, I take it personally.

In many fields ‘good enough’ doesn’t cut it. I don’t really want someone designing cars or aeroplanes to shrug their shoulders and go ‘Oh, whatever… that’ll do.’ But the logical part of my mind realises that there becomes a point where the benefits of continuing to improve on something (to attain perfection) doesn’t outweigh the costs or effort involved (is that the law of diminishing returns???). In my other blog I edit and edit posts to death, having written them in a Word document and toiled over them in that format before transferring them to my website. As a result I get so worried about what I am posting that I rarely post more than once a month.  Now that I am posting daily in this blog I write directly into the blog and read it through a couple of times before hitting the PUBLISH key. At work I will draft briefs or letters or talking points and sometimes find myself stressing over them and pouring over the online thesaurus to find the BEST POSSIBLE word, all the while conscious that the reader will probably only scan it anyway – and won’t care if the iambic pentameter could have been improved upon. 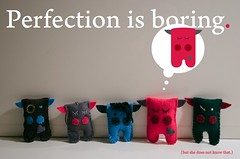 I also don’t believe that I still yearn for the ‘perfect’ body, although I rarely can look at another person and want: their face; their hair; their height; their arms legs and trunk. I can’t think of anyone I aspire to look like. If I’m going to fantasise then ‘good enough’ doesn’t cut it. BUT… when it comes to me, I believe that a healthy weight range would be enough to keep me contented. Years ago after a stint at Weight Watchers I got stuck at about 91kg. For ages. Eventually I got frustrated and started binging again. My goal weight for my height is 79kg, but frankly, I’d be happy if I got back to 91kg. I looked like a normal person back then (no one pointed at me in the streets and I don’t believe people would have thought me ‘fat’), and I was even vaguely attractive to the opposite sex. I look at photos of me from back then and WISH I’d just tried to maintain that weight. I’d done the same thing in the mid 1990s. I’d got stuck at about 83-85kg. I was playing a lot of sport and so was pretty healthy. I was in my mid-late 20s and desperate to lose more weight (I’d lost about 20kg at the time). As a result I spent the better part of 3 years dieting and not-dieting. I’d binge eat and then I’d starve myself. My weight didn’t budge but I didn’t really ‘enjoy’ my life that much at the time. Years later and 30-40kg heavier I looked back and wished I’d just made the most of it – kept exercising and attempted to maintain that weight.