I like to think that I try new things all of the time. I am currently working in an organisation which has undergone much change in recent times. Many staffers are finding that challenging which is something I don’t understand. Over the past decade or two I’ve changed jobs (constantly), professions (several times) and lived in a myriad of cities and countries. It is only now that I am in my early-mid 40s that I find myself clinging more to routine and railing against the notion of picking up and starting elsewhere. Again.

But while the notion of change doesn’t bother me, the control-freak inside of me likes to have some say over my own destiny and changes I’m facing. So even while I brag about being ‘open to change’ today’s topic gives me pause for thought because like everyone else, I’m pretty testy when I’m Outside of my comfort zone.

I do not regret a single thing from my past. I do not continue to hold grudges against those who hurt me. I do not wallow that I wasted years of my life in sadness and treating myself poorly. Those scenarios all pushed me out of my comfort zone and forced me to grow stronger and change my life.

We have to believe that we have the strength to face difficult situations. The most rewarding moments in our lives often come with some growth and change. Just as our muscles will not strengthen without some physical challenge, our lives will not have room to grow without having to push ourselves past emotional, mental, physical, and spiritual discomforts from time to time. I don’t think I would fully experience life if I could just breeze easily through. I have goals and desires so I can pursue my best life. I know they won’t come easy, but that is what makes them so great. As long as they tie in with my purpose and those things valuable to me, I know pushing myself towards them will help fulfill me in many ways.

After all, how great does it feel to know you accomplished something? The greater the challenge, the sweeter the victory. Sometimes simply surviving something is an inspiring victory in itself. We need not forget those challenges we have overcome and allow them to empower us today. We must embrace new trials as a way to achieve a higher quality of life in the long run. They shape us into even greater people than we already are.

What challenges have you overcome? What goals have you achieved? Let them empower you today! 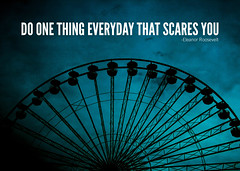 I’d like to be able to say I’ve overcome all sorts of challenges and hardships, but I haven’t. Not really. Not compared to so many people. Sure, I’ve done things that are difficult – for various reasons. I’ve moved about the world alone and lived in developing (and sometimes unsafe) countries. I’ve played competitive sports and took myself off to a fat camp that confronted me on a number of levels; but while I believe I’ve practically leapt out of my comfort zone on a number of occasions I can’t really say I’ve faced adversity. Most of the major changes in my life, have been of my own choosing and – to some extent – within my own control.

Having said that, over the years I’ve identified some life-changing moments or turning points. I’ve given myself the challenge of identifying just five. So here they are in chronological order.

1. I failed University. When I first went to University in the late 1980s I studied Commerce. I disliked it from day one. I dreamt about studying journalism or Communications – something more creative, but felt compelled to pursue a more ‘responsible’ career. As a result, in my second year I barely attended lectures and failed three out of the five subjects I studied. But… it wasn’t all bad. I switched courses, underwent some soul-searching, worked for a year or so before eventually going back to study something of more interest. Bizarrely I haven’t stuck with that field (Psychology, having done an MBA and moved from Project Management into other fields since), and cannot imagine my life had I remained an accountant (or similar) all of these years.

2. Working in the government after University. When I first finished my undergraduate degree I was considering undertaking a fourth year which would allow me to practise as a Psychologist, but… my parents had already paid for me to remain at University longer than planned and I felt an obligation to get into the work force despite much antipathy about it. My first job was in child protection and youth justice in the far north of the State. Unsurprisingly, although I liked working with kids and young people, I disliked the job quite a lot and moved on fairly quickly, but it was the wake-up call I needed. I was confronted with a range of issues faced by disadvantaged community members and developed a better (and more evolved) understanding of the ways of the world. 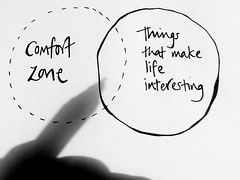 3. I became an overseas volunteer. Several years later I’d moved on with my life. I was working in Local Government and was in my mid-late 20s and feeling quite unfulfilled. I wasn’t ready to buy a house and settle down but didn’t know what else to do. There has to be more to life, I was thinking. Although I knew nothing about the industry when I first considered it, I applied and got accepted to, an Australian Volunteer Abroad program. THAT was life-changing. My first posting was in Mozambique in south east Africa. At the time it was one of the poorest countries in the world and security was still an issue. It opened my eyes to what was out there and got my attention. After another volunteer gig in Cambodia I started working for the Federal Government in the area and it developed into a whole new career for me.

4. I returned home. After spending two years on a diplomatic posting overseas I was due to return to our nation’s capital. But I’d had a tumultous two years. I’ve already said before that I yearned for normalcy. I missed the connectivity with family and friends. So rather than return to head office, I resigned and returned to my hometown of Brisbane, in Queensland Australia. And here I have remained (near my family and friends) for the past (almost) ten years.

5. Accepting the inevitable. I’ve already written here about my yearning for a child, only to discover earlier this year that it wasn’t to be. I was given VERY low chances of getting pregnant even with IVF and after some angst I decided to not pursue something with a one percent chance of success which would have kept my hopes up for (many more) months and months on end. I drew a line in the sand and said, ‘That’s it!’ I took control and decided I needed to start planning a life alone… and I’m slowly getting there.

There you have it. I’ve been slightly off-topic today but the above points are challenges I’ve come up against and (I believe) overcome.. and I like to think I’ve come out the other side a stronger, smarter and better person.