It’s day 22 of this ’30 days of self-love’ blogging challenge already. This time next week it will all be over and I’ll have to devise my own blog post topics again. But not yet…. Someone else is still setting the agenda this week and today’s theme is: Forgiving yourself.

I’ll paraphrase Tina’s challenge words today as she shares some of her past that those who don’t follow her blog wouldn’t be aware of. She says, “None of us are perfect. We all make mistakes. Sometimes, we let those mistakes control us and hinder caring for ourselves.” She also talks about behaving badly in early adulthood, losing respect for herself but continuing with the behaviour because she couldn’t believe she could change. She then fell in love. Her anger and inability to forgive herself almost destroyed the relationship but when she finally shared her past her partner surprised her. He didn’t leave her as she expected but told her she needed to forgive herself. I’ll let her continue:

“I don’t know why I had never thought of forgiving myself before then. Perhaps because I had spent so much energy trying to forgive and get past what others had done to me? Who knows. Yet, having the power to tell myself that “it’s okay…it’s in the past…you can move forward and change for the better now” changed everything. We have no reason to punish ourselves. Consequences for our actions and decisions will always exist, but we are not the ones to determine them and harm ourselves. If something screws up one day, don’t feel the need to drown yourself in negativity. Recognize what could change and work to do your best to improve the situation from that moment forward, without punishment. Dwelling on the past and our weaknesses does absolutely nothing for our lives.

Is there anything you have trouble letting go? Are there any ways you try to “punish” yourself? 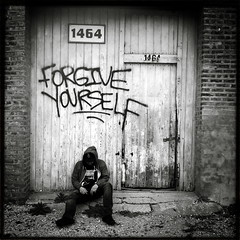 I’ve already mentioned the fact that I live with regrets. In some respect I act like I’m already a withered old woman on her death bed reminiscing about ‘the good old days’. Even in this blog I rave about the anorexic me who did some modelling and played basketball fairly well. Which is a worry. Because when I was young my father regaled me with tales of his footballing years, when he played for our State and could possibly have gone further. But didn’t. I was a captive audience and mightily proud of my dad, the footballing hero. But over the years I heard the same tales again and again. And again. I started doing mental eye-rolls the moment the reminiscing started, although didn’t say anything (obviously) for fear of hurting his feelings. As I’ve gotten older I recognise that he was just one of many many footballers who played representative football at a high level. I’m also conscious that – in many ways – that’s the big achievement of his life and one he revisits often now he’s older. And now I find it sad that he’s talking about events of 50 years ago being the high point of his life.

Shit! Am I like that? Possibly. I had none of the sporting prowess of my brother and possibly even my father and yet I often contemplate my once-athletic lifestyle. Fifteen to twenty years on I continue to talk about ‘when I was anorexic’ as if it was yesterday when frankly, even the bulimia stopped years ago. I’ve moved on. Physically at least. But mentally? Not so much. Obviously.

I seriously regret that once I was someone with potential, with possibilities and I squandered them. I’m angry at myself for that and, I suspect, that is one of the reasons I put my life on hold (as per my ‘One life to live’ post) waiting for everything to be ‘right’ before I can settle down and get on with the business of ‘living’ rather than just ‘existing’. It seems I’m having trouble letting go of my past and am bristling with anger, unable to forgive myself for what I see to be an epic waste of much of my life.

Similarly I have complained here that I have thwarted previous weight loss attempts by getting to a certain point and then giving up. Again and again.  In the past 10 years alone, I have lost over 20kg on two separate occasions, one of which saw me nearing my goal weight. But I gave up, and slowly but surely the kilograms came back on. And I let them. It’s no secret that I regret that; that I’m angry at myself for allowing that to happen, for making it happen. And I hold onto that anger. Like a lifeline to my past.

But am I spending too much time focussing on opportunities lost or wasted and raging internally when I need to move forward with my life? I used to talk about eating my anger. I often felt myself seething with anger but had no idea who with, or why. I’d stifle the constant (but latent) rage by eating. And eating. And eating. And food and drink would numb me. They would make everything all right and I would feel confident that everything would eventually be okay. In the end. Well, frankly the friggin’ end is nigh. I’m not getting any younger. I can’t keep clinging to my past; to lost opportunities and waiting to become ‘that’ person again. Cos frankly, that person wasn’t a happy person. That person was locked in a cage and yearned to get out. That person was always numb and felt nothing. I am no longer that person.