Today’s topic is a goodie. It is VERY relevant for me as it focuses on my second language. “Italian, French, Spanish?” I hear you ask. “No!” I respond, “Fat talk.”

We all know about fat talk. Even if you have never heard the term, you have experienced it. It lies in that inner dialogue of self-doubt that puts down our image and denies us of our true beauty. I actually like to think of it as “self-doubt talk” because I believe it plays in more than physical appearance. It comes when we commiserate with other women about how “this dress makes me look fat” or “gosh, I’m so stupid to think the boss would like my idea”. Maybe it even hides behind those times we refuse to accept compliments.

I don’t even begin to think we can fully stop such negative thoughts. They will always find a way to creep back in. We need to become more aware of them and work hard to stop them in their tracks. I have more confidence than ever in who I am, my ability to care for myself, that I have much to offer others, and that I am in fact beautiful. I still face fat talk more often than I care to admit. Maybe even to the likes of once a day. The difference is I can stop it in its tracks.

What are some steps I take to stop the “self-doubt” talk when it begins?

One last thing – be aware of when others participate in fat talk. Don’t allow them to! It makes it easier for you to participate as well. As women, we should be lifting each other up instead of standing by while we tear our own selves apart. Simply say “Stop. You’re smarter than to put yourself down like that”. I think this works best because you’re not handing out a compliment to reaffirm the behavior. Also, you’re still showing you think highly of the person and want what is best for them.

What do you do to stop fat talk? From yourself or from others? 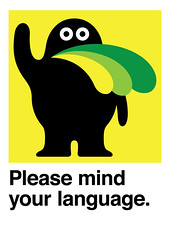 I’ve written before about the way I treat myself. In ‘A better me than anyone else’ I wrote about a work colleague chastising me for speaking badly about myself. In The Scales of Judgement I talked about a workshop I attended in which the presenter challenged us to speak about ourselves ONLY in the way we would speak about others. And in Fat vs Phat I talked about the negative connotations attached to the F-word (the OTHER F-word I mean).

So, it seems I’m big on the self-deprecating language. I’m excessively negative: cynical and pessimistic. A glass half-full kinda girl. And because I’m a perfectionist, I fear failure and so am loath to put myself ‘out there’ on a limb, all alone.

I know I do it. I hear myself say the words and – if I’m really honest – am proud of the fact that I am not vain or arrogant. How bloody strange is that? I’d prefer to describe myself as ‘fat and ugly’ than identify positives about myself because it’s more comfortable for me. 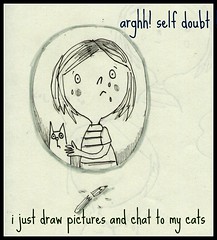 I don’t blame my brother, but when I was younger – before losing some puppy fat – he used to tease me about my weight. I was ‘FUGLY’ (Fat and Ugly) or BFU (Big, Fat and Ugly). Many years later after I was recovering from anorexia, a female college friend of my brother’s told me he worried that his former jibes had contributed to my eating disorder.

I know the say goes, “Sticks and stones can break my bones but names can never hurt me.” But it isn’t necessarily true. Harsh words or criticism from those we love or look up to are hurtful. My brother’s taunts were just those of a 13, 14 or 15 year old boy tormenting his overly-sensitive 9, 10 or 11 year old sister. They’re long forgiven (though obviously not forgotten). Now the words that hurt are my own. Every time I make a disparaging remark about myself or my appearance I am perpetuating my own victim mentality and slapping myself across the face. (At the moment) every time someone compliments me on my weight loss I respond with, “Thanks, but…. I have a long way to go!” After all, I don’t want anyone to think me self-congratulatory. 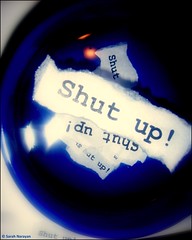 Bloody hell! If anyone else asked me if they were allowed to be slightly chuffed at their weight loss I’d say, “Hell yeah!” And yet, I won’t allow myself to demonstrate any self-satisfaction. So, a little goal for me is that when someone comments next on my weight loss, I will say thank you. FULL. STOP. No ifs or buts.

And I will try to follow Tina’s suggested steps every time I feel I’m about to espouse something negative about myself. I won’t just ‘bag’ myself out of habit. I will be more thoughtful and considerate when talking about myself. As if I was someone else. And… if you read / see / hear me engaging in any fat talk or tearing myself apart, feel free to pull me up on it.