Uh-oh. This isn’t going to be pretty. Maybe I should start with a disclaimer; or a rating like PG. Or more appropriately, UE (unhealthy eater), or some equivalent. Healthy eaters and nutritionists out there will cringe at my responses to today’s blogging challenge which is about Eating naturally.

Unless of course the topic itself it is meant to be a response to a question.

“What are you doing Deborah?”

Yes, that I could sell, but this? I’m nervous as hell. So here I go with Tina’s challenge; Once more unto the breach….

I have certainly been in a place where I could care less where my food came from as long as it helped me reach my daily caloric intake goals. Even when I focused on eating enough calories to fuel my body, the calorie count still reigned supreme. I didn’t consider reading the ingredients of nutrition labels over the other statistics. I didn’t think about where my food came from. I didn’t determine a food’s worth based on its wholesomeness – an apple or a 100 calorie pack at lunch were interchangeable.

I had already given up those food rules of things being “good” or “bad” but the calories still defined how they fit into my eating habits. After my fitness competition, when I could freely give up calorie counting (and coincidentally a bit later picked up reading blogs), I began to change how I viewed food. Not only did I want to fuel my body with enough food, but also with valuable energy.

I knew my body deserved respect. I wanted to care for the body God had given me.

That was how I personally become to understand the importance of giving my body the best quality and choosing the apple over the 100 calorie pack every time. Only I have the choice on what my body receives nutritionally. I still don’t view things as “good” or “bad”. I still will have processed items without any guilt. Now, however, I desire the wholesome foods because of how they support my body, instead of how they support my personal goals or body image. I am still a work in progress and have a lot to learn. Nevertheless, I also know that I will make that progress and continue to honor my body with natural, wholesome foods. Because it deserves it. 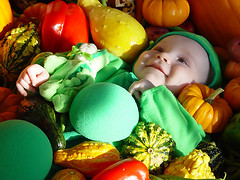 I wouldn't eat the baby of course. (I don't like baby food. Hee hee!)

I don’t think I’ll even start by talking about how I view food. I’ve written endlessly before about the things I’ve stuffed into this body – from my corn chip fetishes; to meringues, tins of caramel and yoghurt; coco pops with milo and hundreds and thousands; hot chips… and the list goes on. And on. And, well, on…

I’ve obviously never really viewed food as something to ‘fuel’ my body. Instead I’ve viewed it as my lifeline. I’m definitely one of those people who lives to eat; not eats to live. For me, food was meant to be fun and exciting rather than a necessity. And, I’ve never really worried about eating stuff that I don’t like – just because it’s good for me.

I used to be worse. I grew up NOT eating any vegetables other than potatoes. I think I briefly ate mandarins and occasionally ate apples (as long as they were peeled and cut up and sprinkled with sugar). I was in my late 20s by the time I added tomatoes and onion to the list of ‘healthy foods I eat’. By the time I hit my 30s I was also eating carrots and capsicums, and peas, beans and corn. Occasionally.

And I must admit the list hasn’t grown much since then. I don’t touch anything that’s green and leafy and foods like broccoli and cauliflower creep me out. It would be years since I have eaten an apple. In fact I used to only do so when I was on a diet. If I’m trying to get some fruit into me now I’ll have one of those containers of 100% apple puree. (And I won’t even own up to the fortnightly [155 calorie] sparkling apple cider drinks!) And I tend to be lazy about vegetables unless I’m cooking a stir fry. But I do try. Occasionally. Because of the need to be healthier, one of the goals when I started this weight loss program seven weeks ago, was to cook more stir fries. It’s so much easier to throw vegetables into a stir fry, than to add them as a ‘side’ to my chicken breast, fillet steak, or fish fillet meals.

I am most influenced in my food choices at the moment by their caloric value. With a 1200 calorie a day budget, I’m trying to keep my intake below that each and every day. Mostly I’ve been fine. Years ago I read that protein for breakfast helps kickstart your metabolism, so I often have protein (bacon, egg etc) for breakfast. Today it was and egg and baked beans. Very occasionally (as a treat, or if I’m lazy and can’t be bothered working the microwave) I breakfast on cereal and yoghurt.

I mix up a brew of almonds, sultanas and sunflower kernels and shovel them into little boxes for my morning snack. That way I’m having a limited amount (30g) each day and the calories are easy to calculate. For lunch I’m eating soup that apparently (and seemingly) contains vegetables. And then dinner is meat of some sort but with limited vegetables.

I suspect I probably should take some sort of supplement. Even now writing about this reminds me that I need to treat my body better and be more conscious of what I put in it. Sure, I suspect I will still – on occasions – have popcorn, butter and flavouring for dinner or lunch; but I should try to include some vegetables into my nightly meals. Not to mention fruit. I usually have spare calories each day, so perhaps an apple each day would fill that gap.

So, from this I have some new goals. Next time I got shopping I will buy some crisp green apples; AND I will endeavour to cook myself a stir fry at least three nights a week and have some veges (other than onion, garlic, tomato or potato) on the other nights.