Wow, I’ve just realised I’m half way through this 30 days of self-love blogging challenge I commenced… well, 15 days ago. Today’s topic is one which I seriously need to do some work on: Perseverance.

I never once doubted continuing the 30 Days because I do care about it so very much. I had realized that in order for my passion to continue I had to practice perseverance in being true to myself. Following through can present quite the challenge when it’s easier to just let things go or ride along in the sweeping currents of others’ wishes and decisions. We have to fight…for the right…to paarrr-tay LIVE OUR LIVES.

In reality, anything worthwhile involves struggle. What would our lives look like if we always took the easy road? We have to adopt a will to persevere in those trying times because things will turn around. Our issues only even have a chance of turning into something wonderful with our determination to plow through them backed up by the 1,000 armies of belief in change and hope in good.

No matter what you face today – overcoming eating struggles, feeling unworthy, facing uncertainty for the future, battling a trialing relationship/health issue/work situation, etc – persevere. Remember that you will make it through and that the hard work will be worth it.

What ways have you seen the benefits of perseverance in your life? 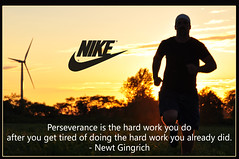 This theme is quite timely for me. I have been doing SO well on this weight loss challenge. Last Wednesday, which is weigh-in day, 6.5 weeks after starting my weight loss totalled 12kg. In just over six weeks! I was so excited. And I seriously don’t think I’ve taken my eye off the ball. I’ve already admitted that I’m not following the exact menu or exercise program laid out by our leader, Michelle. I wasn’t really fit enough to even commence the beginners’ exercise program and I am a fussy eater. But I’ve been staying true to the levels of commitment she expects from us. I’ve exercised six days each week. I’m doing pilates instead of other strength training and 30 minutes on the exercise bike (or 40 minutes of walking) instead of the cardio program, but I’m doing it. Six-days-a-week. As per my commitment. And I”m working out my calories and tracking them EVERY DAY.

During my first four weeks I had some low-calorie days, sometimes only having 700-800 calories, of our 1200 calorie allowance. But after getting sick and my doctor commenting that even 1200 calories was a big drop from what I used to eat I decided to try to stay a bit closer to the 1200. And I have. The ONLY days I have gone over my calorie limit have been those days I’ve had alcohol. Which was only twice in the first four weeks, but twice in the last week alone! On Saturday, after having wine on Thursday and Friday nights I started to panic, worried I was falling off the dieting wagon and about to revert to old patterns.

Given that I know I’m prone to catastrophise I realise I should focus on the positives. Neither night (or the other times I had wine) I’ve consumed extra food or unhealthy options – despite my weakened state. And… on the couple of occasions I felt a bit foggy the next day, I haven’t partaken in any stodgy recovery food. So, all is not lost – but I’ve been getting worried.

I’ve been wondering if my early success has meant I’ve become blase and slackened off a bit. Or am I just tiring of being ‘good’? So so so so SO many times I’ve started dieting and not gotten to my goal weight. I might have lost 20 or even 25 kilograms but I don’t quite get there. I don’t persevere; I give up and throw in the towel. 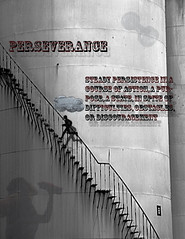 I probably need to think about why. I know that on a couple of occasions – after big weight losses – I have become a bit smug. I’ve dropped 20kg and start feeling good and (almost) attractive and my foot eases off the accelerator. However around the same time I am prancing about like a self-satisfied git, I need to remind myself that I’m still 10-15kg (or whatever) overweight and people who don’t know that I’ve lost lots of weight would look at me and think I should be on a diet.

However, my most common reason for quitting is because I hit a speed bump. Or a brick wall. A few weeks of no losses, small losses or even gains and my motivation falters. I stick it out briefly but then just give up. “It’s all too hard,” I think.

So, while I’ve lost 12kg so far on this weight loss program, I have a long way to go. Like 30-40kg (for fuck’s sake!). I know that ANY loss will improve my health and make me feel better, so I do need to acknowledge the small achievements, but I cannot (AGAIN) lose sight of the end goal. And that end goal is officially 79kg according to ‘ideal weight’ charts; but 90kg according to my logic (and wanting to be able to sustain my loss without excessive exercise or minimal food long term). And, now I think of it, given my 117.1kg weight last weigh in, it’s less than 30kg now. Just.

Now is the time I need to persevere. And I’m relieved to say that I have been; persevering that is.  I exercised over the weekend as usual, stayed off alcohol again and I kept under my calorie limit. And… I have to remind myself that I still haven’t had any of the junk food which plagued me before I started this program. So now I need to (continue to) dig deep and stay on course. And…. I look forward to the days I’m writing about only having 20, 10 and then only 5kg to lose to get to my goal weight. I just need perseverance.