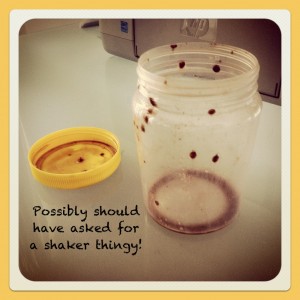 I’ve been promoting a not-dieting approach so my decision to go on the program (after being approached by IsoWhey and its PR company) was not easily taken.

I did however, write at the time that the offer came during a period in my life which was going to be fraught with temptation and I was hoping that, making a commitment to the program (and to someone other than myself), would curb my usual coping mechanisms – ie. Binge-eating and over-eating.

And you know what? It worked.

On MANY occasions over the past three weeks I’ve told myself that I should be ‘allowed’ some treats; I ‘needed’ my fave foods to help me cope with some trauma or celebrate some success, or just help me get through the day. But nary a corn chip or piece of chocolate, rice cake or kernel of popped corn has passed these lips.

No carbs?
I must also confess to the fact that on three separate occasions (one lasting most of a day and the other two involving individual meals) I went ‘off-program’, basically indulging in carbohydrates.

I wrote here about the first, which took place on my final day of work. Then there was a lunch out with a girlfriend  which included some sautéed potatoes – albeit a small serving. Thankfully. The final indulgence came just three days ago when I was about to prepare a mixed grill for dinner (ie. Steak, bacon, eggs, onion, tomato etc) but I caved in and added some potato to the dinner.

The no-carbohydrates aspect of the program (or of any program) is difficult for me. When I’ve done well on weight loss programs it’s been when I’m limited my carb intake. Potato – in any form – is my all-time weakness. (Well that and alcohol, and occasionally chocolate! Oh, and corn chips, of course…)

Two shakes a day
Replacing two meals/day with shakes is recommended on the 21 day Break the Habit Program. I did stick to this for the first two weeks, but found it more difficult when I was no longer working and home all day.

Instead, I often made myself scrambled eggs for lunch rather than have my second shake. On a couple of occasions I then had the shake for an afternoon snack (I’m a bad snacker and don’t do it often).

Taste and satisfaction
I’ve already mentioned that I requested the chocolate and vanilla protein powder and… I actually liked the taste of the shakes. As my calcium intake is pretty low I always mixed the 32-35g serving with skim milk, still keeping the total calories to about 200 calories. The website includes some suggestions for smoothies and references yoghurt and the like, but it wasn’t really necessary for me.

The shakes did keep me full for hours after, though as I am wont to do, I often left my shake consumption until too late so was starving by the time I consumed it (like I said, I don’t snack often and go for HOURS in between meals. While at work, for example, I’d have my morning shake at 7am and then my lunchtime shake at 1pm or 2pm with nothing but diet coke in between!).

I was also gifted some of IsoWhey’s Hot Chocolate while I was trialing the product. And… OH. MY. GOD! It was delicious. I’d been using the low-fat Jarrah chocolate drinks over winter and loved their taste, but this… heaven in a cup!

Better still (and it took a bit of getting used to) the hot chocolate has some chilli in it, so not only does it do what chilli does (speeds up your metabolism presumably) but it also gives you a surprising little kick just after you swallow it.

You’ll see from my FB post on the IsoWhey page that I confessed to dipping a wet spoon into the container as I was making my hot chocolate for additional spoon-licking pleasure. (Hey, don’t judge! I live alone so it wasn’t like anyone else was going to be partaking in the mixture and getting second-hand spittle!!!) 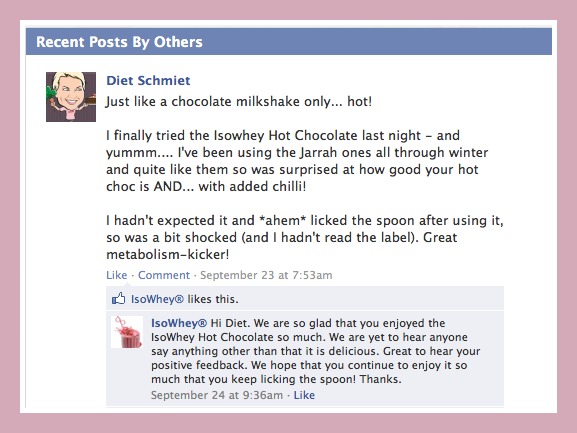 Results
I lost 2.1kg (4.2lb) in my first week on the program, but – I must confess – was disappointed that I didn’t lose more during the final two weeks.

I’ve already mentioned that I didn’t follow the program faithfully. On top of the added carbohydrates, I also indulged in alcohol several times over the three weeks AND because I was wanting to be rather zen about it all, I didn’t track my calories.

My exercise has eased up over the final week of the 21 days (since finishing work) and that might also have accounted for a lower-than-hoped weight loss.

But, most importantly for me, the bloated feeling I’d been experiencing before I started the program has gone! I’d been constantly feeling uncomfortable and self-conscious. I couldn’t suck my stomach in at all.  And now I can. I feel leaner.

The Verdict
I was fortunate and had a telephone discussion with IsoWhey chef and nutrition advisor, Janine Royce, before I started the program. She ran through the program with me and we talked about the non-shake part – which for me is all-important.

o    Feed yourself well – Forget calories and fat grams. Instead, focus on feeding yourself balanced meals and snacks when you’re hungry and stopping when you’re satisfied.

o    Give up notions about “good,” “bad” and “forbidden” foods – If we forbid a food, it often makes us want it more. So learn to eat all foods and tune in to what you really want, not just what you think you want because you “shouldn’t” have it.

I suspect if I’d stuck to the program my weight loss may have been greater. However for me, it served a more important purpose and kept me ‘in check’ during a time which would normally have seen me mainlining corn chips and literally inhaling kilograms of chocolate.

The Fine Print
I thought it was important to whey (hee hee) weigh IsoWhey up against some other shakes. Fortunately Health Food Store Go Vita completed the same exercise recently and Isowhey fared very well. (Update: Canstar Blue has done something similar and that information is here.) 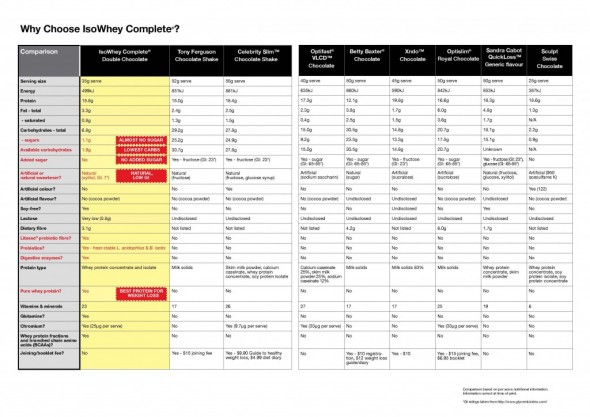 IsoWhey is available from a range of pharmacies and online outlets. My extensive research (ahem… aka Google) unearthed the fact that a 672g container (21 serves) costs $44.95 from most outlets, equating to about $2 per serve. (I think the price reduces if you buy in bulk.)

The delicious and decadent Hot Chocolate powder, while not the cheapest option out there – but will be on my shopping list, is $10.95 for a 210g container.

Why IsoWhey?
If you are thinking about protein shakes I’d recommend IsoWhey. Why, you ask?

I’ve still got some of my protein powder left and am planning to continue using it. A protein shake is perfect for a quick meal but I’m also going to start consider having one as a snack. I’m increasingly brunching (rather than having breakfast AND lunch), so an early afternoon shake will be perfect to stop me prowling the kitchen late afternoon.

Disclaimer: I was gifted a 21 day supply of IsoWhey Complete for my personal use. There has been no compensation or other incentive offered to write a favorable review. All opinions expressed in this space are mine, written with the objective of giving readers my personal opinion on the product used.

Check out my recent (2016) experiences with Isowhey!