Sue Grafton’s Alphabet series are comfort reads for me. They’re a bit like JD Robb’s In Death series, Robert B Parker’s Spenser series and Martha Grimes’ Richard Jury/Melrose Plant series. Opening each book feels like arriving home and being welcomed by old and familiar friends.

On top of that they can be relied on to entertain me for several hours… transporting me to another place (and in some cases, time).

I’ve missed 2-3 letters in Grafton’s series, one of which was ‘W’ but fortunately it had no impact on my enjoyment of her latest, X.

When a glamorous red head wishes to locate the son she put up for adoption thirty-two years ago, it seems like an easy two hundred bucks for P. I. Kinsey Millhone. But when a cop tells her she was paid with marked bills, and Kinsey’s client is nowhere to be found, it becomes apparent this mystery woman has something to hide. Riled, Kinsey won’t stop until she’s found out who fooled her and why.

Meanwhile, the widow of the recently murdered P. I. – and Kinsey’s old friend – Pete Wolinsky, needs help with her IRS audit. This seemingly innocuous task takes a treacherous turn when Kinsey finds a coded list amongst her friend’s files. It soon leads her to an unhinged man with a catalogue of ruined lives left in his wake. And despite the devastation, there isn’t a single conviction to his name. It seems this sociopath knows exactly how to cause chaos without leaving a trace. As Kinsey delves deeper into the investigation she quickly becomes the next target of this tormentor. But can Kinsey prove her case against him before she becomes the next victim? 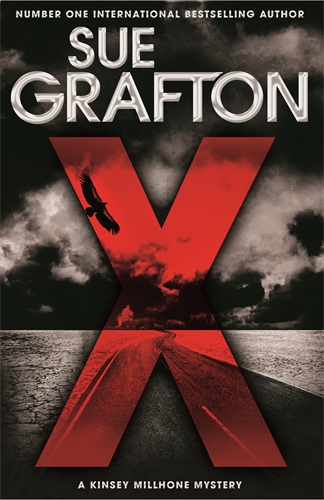 I love that Kinsey’s cases never quite go as expected. The books are rarely very sinister—we’re not dealing with psychopathic serial killers. The crimes are simple. But the investigations became convoluted. And there’s something refreshing about that.

X is the 24th in this series so by now Grafton can probably write Kinsey’s character in her sleep. She continues to deliver consistently though and I’ve had no dips in interest (which I’ve had with Jonathan Kellerman’s Alex Delaware for example).

Kinsey continues to live frugally on sandwiches and her daily run, keeping several exes at bay, and spending time doing favours for others, including the delightful Henry, her landlord.

Hers is a refreshingly simple life in some ways. That’s partially because she’s a no-frills, no-shit kinda woman; and partially because it’s set in the 1980s when information was requested by mail; files were searched manually; and calls made from phones with cords and wall sockets.

This novel’s great fun, well written and paced and lovers of the series will undoubtedly enjoy it. At the same time however… they will of course be conscious that there are only two letters left and be wondering if / how / when Grafton intends to wrap-up Kinsey’s story.

X by Sue Grafton was released in Australia by Pan Macmillan on 1 September 2015.

To celebrate the launch of this book I’m giving away a copy of X by Sue Grafton and Val McDermid’s Splinter the Silence. ie. ONE prize, TWO books!
(I received double-ups of both so sharing in my good fortune!)

THIS COMPETITION HAS NOW CLOSED. Thanks to all who entered.