A few blogging friends have started a monthly link-up sharing what’s on their bookshelves. My bookshelves are actually packed. I even have a to-be-read (TBR) bookshelf and – once they’re in my immediate future – a TBR bath trolley.

I figured instead I’d share some of my reading highlights of the past month and some coming up.

Rabbit Hole is a standalone crime novel by Mark Billingham. It’s about murder in a psychiatric unit. It’s the quintessential locked room (well, facility) mystery. The police are investigating but – to their chagrin but her delight – Alice Armitage, formerly with the police herself but now a patient – is on the case. This is cleverly written from Alice’s somewhat distorted point of view.

The Last Guests is my favourite of JP Pomare’s thrillers. It’s set in his birth country of New Zealand and dips into voyeurism, gaslighting, blackmail and… ultimately violence. It’s twisty and will certainly keep you guessing.

Twenty Years Later is Charlie Donlea’s latest thriller and (like his other recent books) is centred around a true crime documentary, reinvestigating a case from… twenty years earlier. Donlea’s also given the TV show host a murky backstory to complicate matters.

Just Murdered by Katherine Kovacic brings to the page Miss Peregrine Fisher. Niece of Phryne Fisher and star of Ms Fisher’s Modern Murder Mysteries. The characters here (a few decades after Kerry Greenwood’s Miss Fisher series) were created for the popular television show. Kovacic with an impressive background in art history (with detailed attention paid to fashion, culture and decor of the time) and sassy female detectives, has effortlessly brought them to life. This novel is based on the first show of the series and there are a few diversions that I think improved on the original.

The Devil’s Advocate by Steve Cavanagh is the sixth in the series featuring former con-man turned lawyer Eddie Flynn. Here Flynn’s co-opted into helping a young man accused of murder who is being railroaded into a guilty verdict for a prosecutor with a predilection for capital crimes and the death penalty.

The Night She Disappeared by Lisa Jewell is one of my favourites of the last month of reading. It unfolds in two timeframes and is centred around a young couple who’ve gone missing. It’s only a few years after the fact when new evidence is found and we’re buried in a story where nothing and no one is really how they seem.

I’ve just finished Cutters End by Margaret Hickey and the review is imminent. (When I get it down from over 750 words!) Sarah Bailey’s The Housemate is up next. But you can see my bath trolley has some excellent (immediate) future reads on it. 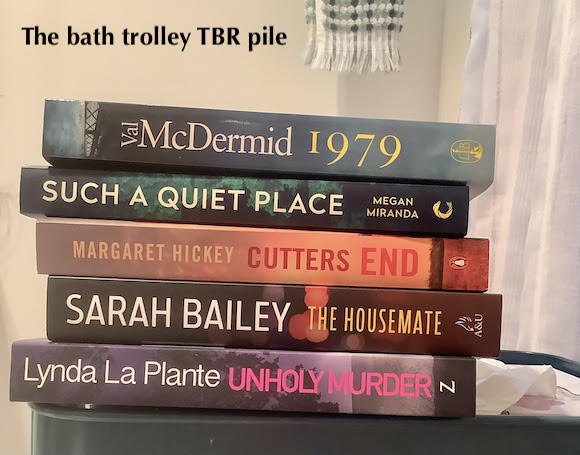 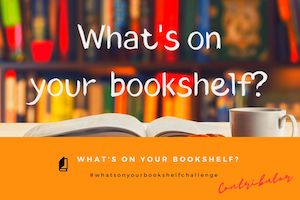 I’m linking up with Jo,  Sue, Deb and Donna for “What’s On Your Bookshelf?” a monthly feast of all things book related.

So… what’s on YOUR bookshelf?