Eleven years ago 12yr old Reggie LeClaire was kidnapped by Daryl Wayne Flint and kept in his basement for four years. Her rescue was fortuitous, having been found in the trunk of Flint’s car after an accident. Flint suffered brain damage in the accident allowing him to be incarcerated in a mental institution rather than prison.

He’s festered away there for seven years, a model and placid patient until one day he kills a visitor, steals his ID and escapes.

Reggie’s now Reeve, a college student. She remains close to her sister and father but few in her life know of her history—something that changes after Flint’s escape and the police, FBI and media are suddenly interested in Flint’s former captive.

Her insight into Flint however, means she’s able to offer the FBI assistance and she agrees to work with retired agent, Milo Bender who she met nearly a decade before. 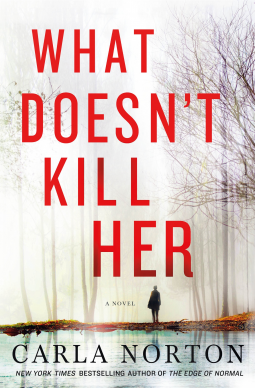 It’s soon obvious that Flint is capable of more than anyone thought. Far from the brain-damaged pedophile he was originally believed to be, it becomes clear he’s an opportunistic killer who may not have been working alone.

Reeve’s required to draw on long hidden memories of her past to assist Bender and the FBI, but unbeknown to her Flint still sees her as the one who got away and refuses to back down from his unfinished business.

The fast-paced What Doesn’t Kill Her is the second in this series by novelist and true crime writer, Carla Norton. She’s done a good job developing Reeve from someone whose natural instinct is to bunker down and hide; to someone who’s willing to fight back and—better still—fight for others who are in similar situations. I suspect the series will continue, with Reeve working with law enforcement to track down kidnappers and sex offenders.

What Doesn’t Kill Her by Carla Norton, published by St Martin’s Press (Minotaur Books) is a great psychological thriller and available from 30 June 2015.

Does this one appeal?

Buy now from Booktopia or Amazon