This is a really hard review to write. For most of this book I was blown away by Kate Van Hooft’s writing and her metaphorical and bewilderingly beautiful prose.

I was waiting for the climax – which I knew was coming from the backcover blurb – but it was very late in eventuating. And then the book finished. And I have no f*cking idea what happened.


Simon is an eleven-year old boy who lives in a world of silence, lists and numbers. He hasn't spoken for years and he doesn't know why.

Everyone at school thinks he's weird and his only friends in the world are his brother Davey and Superman, who's always there when he needs him.

One day Simon shares his Vita-Weats with Cassie, the scary girl from his class, and a friendship starts to form. And the new teacher Ms Hilcombe takes an interest in him, and suddenly he has another friend as well.

When Ms Hilcombe goes missing, only Simon knows where she is. But he has made a promise to never tell, and promises can never be broken. So now Simon is the only one who can save her.

I mean I kinda think I know what happened. Well, maybe. But I’m not entirely sure. Did I miss something? Is it entirely obvious?

However…. for 7/8 of this book I was captivated. I love that Van Hooft doesn’t label Simon or his behaviour, and books like Sophie Laguna’s Eye of the Sheep, Kylie Kaden’s Missing You, The One in A Million Boy by Monica Wood and Be Frank With Me by Julia Claiborne Johnson come to mind as being similarly obliquely sympathetic. (And I do apologise in retrospect for the overuse of adverbs!)

It would appear perhaps as if Simon has autism. But then there’s the rage: Simon often talks about his ‘angries’. When trying to describe himself and his feelings to a doctor he drew an image….

I drew raindrops over his head, and a storm cloud where his shoulders met his neck. For arms I just drew lightning bolts coming out of his chest and down to his fingers. I didn’t have enough room to draw his tummy, so I coloured his chest in with the pen, as heavy as I could make it without putting a hole through the page. p 84

In fact, Simon’s voice and his description of his feelings and his reactions are as visceral as they are metaphorical. I marked phrase after phrase / quote after quote as being magical and leaping out at me.

I was stuck on the spot. There were grey clouds gathering heavy around my throat and I held my mouth shut tight to keep the thunder from getting out. p 17

The angry was burning around my neck, and I felt the heavy of it, and I was trying to keep all my muscles up and working and upright. I started trying to clear my throat of it, but I could feel it coming in through my nose, and there was already some of it in my hair, and when I tried to pull the angry off my scalp, clumps of hair came out along with it, and I heard the grunt of the angry in my throat more than I felt the pain. p 265

In addition to the genesis of Simon’s psychological / physiological challenges  there’s a lot happening in the background. Slowly Van Hooft shares with us some of Simon’s earlier years and we learn more about his mother. Kinda.

And there’s his grandfather with whom he feels some closeness, though he’s now lost in (and to) his memories in a nursing home.

I reached out to Grandpa and I squeezed his hand real hard in mine. It didn’t wake him, and I gripped his hand so that the memories would travel down my arm and flow through my skin into his, so that they would flow into his blood and into his nerves and then into his brain, and then my memories would get all mixed up with his ones, and he could have them there in his head where he needed them, and he would know who we were when we came back to say goodbye. p 21

And then there’s Ms Hilcombe…

“You know it’s funny, Simon,” Ms Hlicombe said, “but I always worry that I’ll say the wrong thing around you.”

“I mean, not that I suppose you would think less of me,” she continued. “It’s more that… you make me choose my words quite carefully. Like, I want to think carefully about what I say to you. It’s a rare thing to be around someone who just listens. I kind of like it, even though you make me work harder.” pp 111-112

Van Hooft does a great job at scene-setting her tale. I did a writing course years ago requiring us to indicate something’s time and place without actually using any of the usual indicators; and the opening pages of this book quickly take us back to car windows that have to be wound down, the advent of colour television, plastic clad hard copy street directories and Australian cricket stars of the 1970s.

If I could have finished this book a chapter or two earlier I probably would feel more intrigue and less closure (wondering what ‘might’ happen / have happened) but also less frustration at not entirely knowing what happened. For me, this had the potential to be one of my favourite books of the year but…. it went in a direction that wasn’t ultimately satisfying and I feel kinda cheated.

I know these are #spoilerish, but I was left with so many questions. Did Simon really know where his teacher was? What exactly happened re his mother? And who was the subject of Simon and his father’s ‘lookabout’ vigils?

I will never know.

Nor will I exactly know what happened at the end. Or perhaps I’m just in denial? 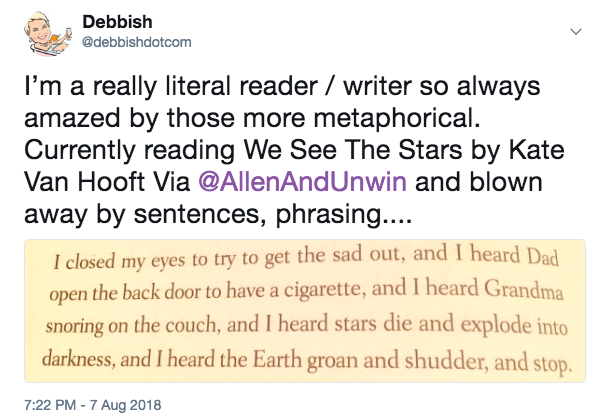 So, there you have it. A book with the potential to blow me away. Beautiful words and characters. And (mostly) a beautiful story… so I’m still giving it 4 stars. Despite the abrupt ending. I can’t wait to see what Van Hooft produces next as I obviously won’t let my frustrations with the final parts of this novel stop me from seeking more of her beautiful writing.

We See The Stars by Kate Van Hooft was published in Australia by Allen & Unwin and currently available.