I’ve mentioned before that one of my favourite comfort movies is The Jane Austen Bookclub. I haven’t actually read the book on which it’s based but a few people advised the movie’s better (a rarity), so I’ve given the novel by Karen Joy Fowler a miss. (Of course I’m conscious that the book was revered enough to inspire the movie, so… who knows?!)

I had however, heard very good things about her latest novel, We Are All Completely Beside Ourselves, released (elsewhere) last year and in Australia in March this year (2014).

In fact, the book was shortlisted for this year’s Man Booker Prize.

As it was my first KJF* I wasn’t sure what to expect. And I most definitely didn’t think I’d be reading the book in a sitting… which (#spoileralert) I did.

It’s a novel which is really hard to describe (without giving too much away) as KJF slowly but surely invites us into the life of our protagonist Rosemary Cooke.

We’re in Rosemary’s head so experiencing everything from her viewpoint. She starts her story in 1996. She’s in her fifth year at University, admittedly pfaffing about when she meets Harlow (a slightly unhinged and eccentric fellow student). Harlow plays a pivotal but minor role in the novel. A catalyst if you like. Rosemary (at 22) through no real effort of her own, has a ‘friend’ for the first time ever and realises she’s not accustomed to the sharing and camaraderie which comes such a relationship. 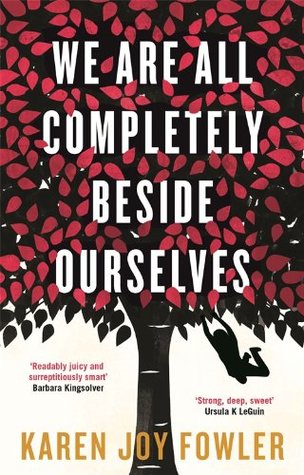 Rosemary wants to keep her past hidden. From others and from herself.

Her sister disappeared when Rosemary was only 5 years old and when she was 11 her brother ran away. Rosemary’s relationship with her parents – her father in particular – is fractious. She’s awkward with people and refuses to let her guard down. Talkative as a child, her silence is now a shield which protects her.

Her meeting with Harlow offers some release and when her newfound rebelliousness combined with confronting coursework and simmering family secrets intersect in a manner akin to the bermuda triangle Rosemary shares with us, her story.

The middle, the beginning and the end.

I often rave on about novels needing to pose a triple-threat  (in terms of plot, characters and writing). This book has them all. KJF’s writing is very clever. If I’m in someone’s head I want to understand their thoughts. I want to think as they do. And I believe KJF definitely succeeded in this regard.

As for the plot itself… I often grapple with narratives which I believe to be pointless (and I’ve put aside Chris Tsiolkas’ Merciless Gods  for that reason). I don’t always need the perfect story arc, but I do need a novel to take me somewhere. I need to go on some journey; or why bother?

There’s a lot at play in this novel. It’s very much about family and what those relationships do and should, mean. It’s about love, trust and honesty; and their place in our families and in our childhood.

I often find myself relaying stories of my childhood only to be corrected by my mother. Memories I’m SURE are true, turn out to be muddled in my mind. Which is why I could relate to Rosemary’s realisation that – when it came to her childhood – all had not been what it seemed. It’s easy to carry with us assumptions which permeate our thinking and taint our perception of everything that comes after.

And finally it’s a novel about regret and about losing people before we have the chance to make amends.

What more can I say? I loved this book!

We Are All Completely Beside Ourselves  by Karen Joy Fowler is currently available in all of the usual places and released in Australia via Allen and Unwin.

* Apologies for the abbreviation. And yes, I am lazy!