Flawed narrators or lead characters are becoming a bit of a thing. It’s risky as there’s a fine line to balance between a character having the odd foible or two and being thoroughly unlikable and turning readers away.

Fortunately Holly Seddon’s hard-drinking Alex in Try Not to Breathe falls into the former. She’s brutally honest about her shortcomings and because we’re very much inside her head we get to know her intimately and it’s difficult not to like her.


Alex is sinking. Slowly but surely, she's cut herself off from everything but her one true love - drink. Until she's forced to write a piece about a coma ward, where she meets Amy.

Amy is lost. When she was fifteen, she was attacked and left for dead in a park not far from her house. Her attacker was never found. Since then, she has drifted in a lonely, timeless place. She's as good as dead, but not even her doctors are sure how much she understands.

Alex and Amy grew up in the same suburbs, played the same music, flirted with the same boys. And as Alex begins to investigate the attack, she opens the door to the same danger that has left Amy in a coma...

This book has been compared to The Girl on The Train—the similarity being the heavy-drinking, somewhat dysfunctional Alex (akin to GOTT’s Rachel).

Like I said, the flawed lead character thing is becoming a bit of a…. well, a thing. It could mean our main narrator is unreliable, but often they’re brutally honest about their own failings. They know what they’re doing but are powerless or unwilling to stop.

Stumbling across Amy is a turning point for Alex. It isn’t just that they ‘could’ have once known each other, it’s because… Alex realises Amy’s lifeless limbo is not of her own making, which is a far cry from her own situation.

Finding out what happened to Amy gives Alex a sense of purpose and she seems to hope it will resurrect her career.

The story unfolds from different points-of-view, so Seddon puts us in the heads of Alex, (Amy’s boyfriend from the time of her attack 15 years earlier) Jacob and a couple of other players.

Although I felt it came a bit too late in the novel, we also switch into first person to hear from Amy and I like the way Seddon’s written Amy’s chapters. She’s cleverly given Amy no sense of time or awareness of her situation. She’s conscious of people coming and going and talking to her. She understands what they’re saying but drifts in and out. She’s confused but accepting.

Backstories are easily woven into the plot so we slowly learn more about both Amy and Alex.

I initially read an early (electronic) version of this book and I occasionally struggled a little with the transitions between some of the scenes and their timing. One paragraph would end with arrangements being made to catch up at some point in the future, for example, and the next paragraph featured the meeting. I note the print copy of the book inserts a number of line breaks in those instances… so hopefully that might make the transitions more seamless; but at the same time the intro to new scenes could possibly be worded in a way that made them less confusing. 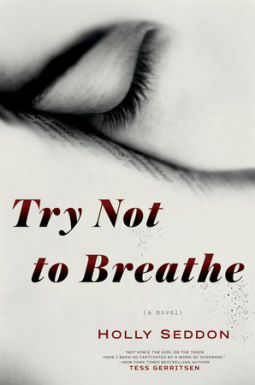 Readers are privy to what happened from the beginning but Alex has to revisit Amy’s past to glean the secrets her friends and family kept from the police at the time.

There are a few red herrings however and Seddon gives us a number of viable suspects. I was able to guess ‘whodunnit’ in this instance. I don’t think I have any super powers of deduction but my extensive reading means I’m (overly) conscious that the introduction of certain characters can point us in the right direction.

The book’s well written and the fast pace kept me turning page after page, but it was the characters (namely Alex) who had me hooked. I loved the way Seddon shared Alex’s drinking behaviour with us. She pulls no punches and I was pleasantly surprised that she portrayed her struggle so incredibly realistically.

I also liked the time given to those loosely (often incorrectly) described as brain-dead / those in comas. Alex stumbles across Amy while writing a piece on neurological studies which allow some communication with those in vegetative states. We learn, for example, that Amy breathes by herself and has sleep time and waking time. And in Seddon’s world (as already mentioned) Amy hears those around her.

My own father was in a coma for about 6 days before he passed away four years ago. We spoke to him during that time and I like to think he heard us. But of course we’ll never know.

As an aside I note that Seddon, a freelance writer, had (still has?) her own music website. Her love of music is very much reflected in this book as we revisit music from Amy’s teenage years.

Try Not to Breathe by Holly Seddon will be published in Australia by Allen & Unwin on 4 January 2016; and by Penguin Random House (Ballantine Books) on 23 February 2016.