A lot of US bloggers share pics and reviews of what they call ‘cozy’ mysteries. I don’t fully understand the concept, but they seem to all feature illustrated / cartoon-like covers and appear kinda quaint.

I assume they’re a bit like my ‘comfort’ reads—easy reads that I know I can rely on to entertain me for a few hours with minimal macabre hangovers after you’ve turned the last page. A bit like watching Murder She Wrote, as opposed to Criminal Minds.

Which is why yesterday I was excited because I had a few new arrivals from Hachette, including Tricky Twenty-Two by Janet Evanovich… one of my (fave) comfort reads (along with Sue Grafton’s alphabet series, JD Robb’s In Death series etc).

Stephanie Plum might not be the world’s greatest bounty hunter, but she knows when she’s being played. Ken Globovic (aka Gobbles), the unofficial student leader of the notorious Zeta fraternity, has been arrested for beating up the dean of students at Kiltman College. Gobbles has missed his court date and gone into hiding. People have seen him on campus, but no one will talk. Things just aren’t adding up, and Stephanie can’t shake the feeling that something funny is going on at the college.

As much as people love Gobbles, they hate Doug Linken. When Linken is gunned down in his backyard, the list of possible murder suspects is long. The only people who care about finding Linken’s killer are Trenton cop Joe Morelli, who has been assigned the case, security expert Ranger, who was hired to protect Linken, and Stephanie, who has her eye on a cash prize and hopefully has some tricks up her sleeve… 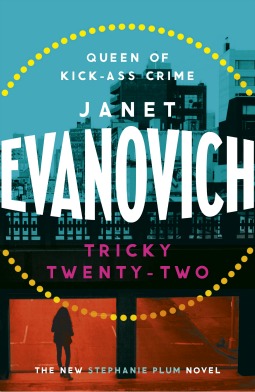 I noted a few regulars complaining (in Goodreads) that the books were really now a bit too similar or formulaic. And that’s true. Stephanie (and the fabulous Lula) try to catch a bond-evader or three (usually failing a few times) and get embroiled in some kind of bigger mystery. Ranger and Morelli come to the rescue, but ultimately Stephanie stumbles across the baddie and helps solve the crime.

We always have the added fun of Grandma Mazur who runs amok and drives Stephanie’s mother to drink. And then there’s the ongoing Morelli vs Ranger dilemma for our hapless bond-enforcement officer.

Which is pretty much what happens in Evanovich’s 22nd outing with Stephanie and the gang.

However, despite kinda knowing how things are going to turn out, I’m happy to tune in again and again. Cos it’s entertaining. I read quickly and I easily finished this within a couple of hours… and it what a delightful couple of hours it was!

It’s always nice to escape into Stephanie’s world, even briefly.

This series is generally less about the mystery / crime at hand (which is probably the weakest link) and more about the characters and their exploits. Which is fine with me. I know what to expect and it’s why I keep coming back for more.

I really enjoyed Lula’s antics in this novel. Occasionally she grates a little, but this time she was in fine form and her character continues to complement Stephanie beautifully.

All-in-all this is another enjoyable outing from Evanovich which really helped settle something that’s been plaguing me for a while—I’ve realised I’m very definitely Team Ranger!!!!

Tricky Twenty-Two by Janet Evanovich was published in Australia by Hachette on 17 November 2015.