Goodreads calls this book Tom Thorne #13, which my finely-tuned skills of deduction lead me to believe is the 13th in this series. Which subsequently stops me in my tracks to wonder if I live under a bloody rock?! I ‘think’ I’ve heard of Billingham, indeed I readily requested this book for review; but how I have wandered this earth, reading endless police procedurals, crime fiction, suspense novels and thrillers without reading a previous book featuring Detective Inspector Tom Thorne?!

I really have no idea. But, that’s been rectified… albeit with no 13 in this popular series by Mark Billingham. Indeed, two of the previous novels have been made into TV series (on Sky 1 – which means nothing to me livin’ in the land down-under!). 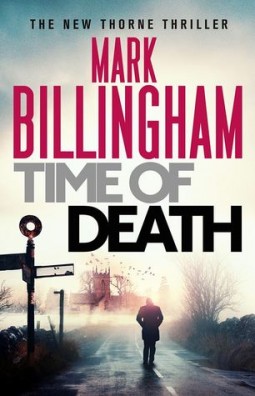 DI Thorne and girlfriend (and fellow police officer) Helen Weeks are having a much needed weekend away when Helen sees a TV report featuring her childhood home town. It’s a place she hasn’t visited since finishing school twenty years before but she’s been following the news about two schoolgirls who’ve gone missing. When Helen discovers the local police are questioning the husband of a former school friend she convinces Tom that she needs to be there to offer her support.

Not long after their arrival the body of the first missing girl is found. It appears she’s been dead for some time, so little hope is held for the other victim.

Naturally Helen and Tom find themselves embroiled in the investigation—much to the rancour of the local police. Tom in particular (who seems to be a bit of a troublemaker… in a ‘dog with a bone’ way) believes the police have got the wrong man.

I couldn’t put this book down. I’ve been reading a little outside my usual thriller / suspense / crime fiction genre of late and this book was like coming home to an old friend. Or comfy sweater. Or similar. I inhaled it in a (long) sitting. Some scoff at police procedurals but they’re my bread and butter—a staple I can’t go long without. #lessonlearned

There’s obviously a lot of backstory I’ve missed when it comes to Tom and Helen and Tom AND Helen, if that makes sense. It didn’t really matter however. They’re still a fairly recent couple so I’m assuming there have been other romantic interests for Tom in the series…. or perhaps it was a long slow burn. #whatevs

I liked Tom Thorne. He’s able to look at himself and his actions dispassionately and happy to admit he’s obsessed with his work. Helen wasn’t as likeable but her difficulty in returning ‘home’ was part of the plot and we eventually learn why.

As a whodunnit this novel worked well. Billingham introduced enough potential suspects to keep us guessing and it didn’t exactly offer a contrived ‘happily ever after’ ending.

I’m keen to read more of Billingham’s work after discovering Tom Thorne and now wondering if the TV series made it to our shores here in Australia.

Time of Death by Mark Billingham is published in Australia by Hachette and available from 26 May 2015.