Bizarrely I’ve read every Nicci French book except (their) last two. Indeed I hadn’t even realised I’d missed them until I started on their latest, Thursday’s Children. Obviously I was familiar with psychotherapist Frieda Klein and her motley crew of friends and colleagues, but there were a few references throughout the book which left me a bit bewildered. Of course I could go back and read the two I’ve missed but suspect the spoilers (in the 4th novel) would render them a tad redundant.

Fortunately having skipped part of Frieda’s life didn’t impact on my ability to enjoy the latest Gerrard / French release which requires Frieda to revisit her unhappy childhood and memories she’d prefer to leave in the past. 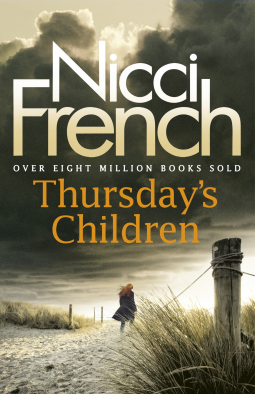 A former schoolfriend, Maddie approaches Frieda with a request to speak to her daughter whose personality change and weight loss has her mother worried. During their sessions, Becky reveals that she has been raped and the circumstances she describes to Frieda are eerily familiar. Unfortunately for Becky her own mother doesn’t believe her tale and assumes she’s ‘acting out’, but when tragedy ensues Frieda has to return to her hometown – something she hasn’t done for over 20 years.

We also meet Frieda’s mother – who she hasn’t seen since she left two decades before and a myriad of school friends who were left baffled when 16 year old Frieda disappeared from their lives without a word.

An old foe also makes their presence felt in Thursday’s Children, obviously setting the stage for future books in the series.

Thursday’s Children moves at a good pace and  Frieda’s band of supporters all offer a pleasant contrast to her prickly manner. I am occasionally surprised by their unwavering loyalty, but it continues to bring out the best in their friend and colleague and Frieda’s increasingly obliged to let down some of her barriers and make an effort to be more personable.

Having said that, there are aspects to Frieda’s personality which I struggle to ‘like’ although I’m sure I’m far from alone in that, but I guess (despite her understanding of human nature) it offers some insight into her character and allows her to appear more vulnerable. (Physician heal thyself ‘n’ all that!)

I have to confess that I’ve preferred many earlier Nicci French novels to the Frieda Klein series, but they’re still page-turners.

Thursday’s Children by Nicci French is published by Penguin Australia and available from 26 March 2014.