It’s that time of the week again… and there’ll be no weather talk from me cos it’s still hot and dry in my part of Australia. Alas.

I also need to apologise to bloggers who participate in the Sunday Post or ‘It’s Monday’ linkups as I didn’t get around to read as many posts as usual last week. Don’t ask. Long story.

I kicked off the week with the enjoyable Evil Games by Angela Marsons before launching into Daniel Cole’s Ragdoll and finally Sally Hepworth’s confrontingly weepy A Mother’s Promise.

Unsurprisingly I reviewed some books, but just a couple as I have two reviews pre-prepared for this next week for a change!

I planned to participate in a blog link-up on Monday and the theme was ‘love’, but as has been common of late, I couldn’t get my own thinking straight so just wrote about five things I’m currently loving.

And finally I explained why I don’t read romance novels – a post which was poorly timed for reasons I’ll explain later!

I went on my first work drive of the year… about 4.5-5hrs of driving for a 90min meeting. Sadly I had no audiobook so spent the time listening to podcasts and some music.

I also went back to ‘dancing in the dark’ – the class that involves people dancing around a dark room (albeit with disco lights) in any old way they like.

And I went to an event with the surprisingly funny Candice Fox. I love Candice’s writing but she spoke for an hour and was hilarious. Everyone loved her!

And… this little non-reader of romance won tickets to the Australian Romance Readers Convention. Yes, really! 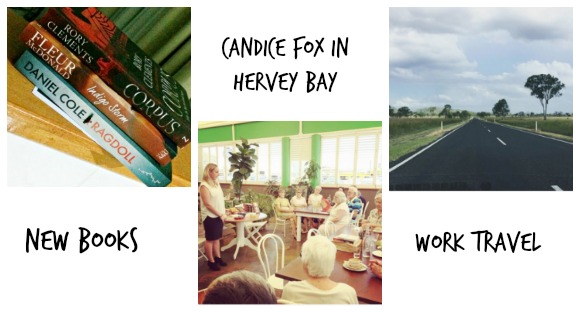 I have another work trip Monday which is a slightly longer 5.5-6hrs drive in total and thankfully I have an audiobook this time around. I’ll be listening to James Phelan’s Dark Heart.

And then there’s this…

I planned to write a post – for Valentine’s Day and ‘romance’ week – to explain why I don’t read straight romance novels. (Again, I mean ‘solely’ romance, not non-gay!)

I didn’t get my act together on Tuesday and decided to publish it for a link-up I do on Thursday and – just before I finished tweaking it I got an email to say I’d won a pass to the Australian Romance Readers Convention (ARCC) 2017.

And yes, the irony of it all does NOT escape me. My feeling are a little mixed. I’ve written about the fact I wanted to go to a readers / writers event this year. Sadly there aren’t many around for crime fiction but – if given the option – I probably wouldn’t have chosen romantic fiction. But… I do want to hang with like-minded people and those who are as passionate about reading (and writing) as moi.

So this time next week I’ll be coming to you from Melbourne. #eek

And that’s it for this week in reading. (And blogging and other stuff.)

What have you been up to? Are you a fan or romance? Or readers’ conventions?

I’m linking up with Kimberly from The Caffeinated Book Reviewer and Kathryn from The Book Date.