Where's that sneaky bug now?
After finding bug guts on his shoe a boys obsession with insects sees his imagination run wild...

Life passes by way too fast. We've got to slow down and enjoy it. I know myself that spending quality time with my kids is hard because of daily pressures and responsibilities. All this running around can sometimes suck the FUN out of life! When you read 'There's Bug Guts on my Shoe' it forces you to slow down, connect and spend quality time with your kids where learning is actually disguised as fun! Sneaky huh?

On the weekend I visited the local library to hear Fraser Coast author Deb Pak read her new children’s book, There’s Bug Guts on my Shoe. Of course I don’t have kids but know enough of them to know how much they love all-things-gruesome. Like poo and farts and guts. And bugs, dinosaurs and robots. Oh, and something called Fortnite apparently. 🙂

The book itself follows the appearance and disappearance of a bug until it’s discovered at the end… and I won’t say where, cos #spoilers. Though the title does kinda give it away.

The illustrations and ideas behind looked very cute and Deb was able to point out a miniature ambulance attending the scene after the bug’s (ummm) demise (for example).

I only had a brief chat to Deb after the reading and it was a ‘hive’ of activity (#sorrynotsorry) as the library had set up some bug-making paraphernalia for the kids present. 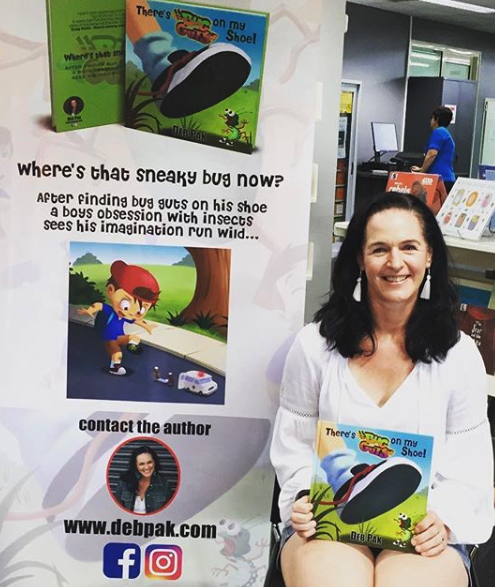 There’s more information on her website about Deb and about the hybrid model of publishing she adopted (assisted-independent publishing), as well as her motivation for writing the book – which centres around making reading and learning fun for kids.

As a complete aside it was the first kids’ activity I’d been to at the local library (in Hervey Bay) and one had also been held in nearby Maryborough the week before and it seemed like a great initiative.

There was a good crowd in attendance and no shushing or frowning, rather singing and excitement; and the kids certainly got into the story and all-things-buggy.

There’s Bug Guts on my Shoe by Deb Pak can be ordered from her website and you can sign up to join the bug guts tribe there as well.