Australian author Favel Parrett’s Past The Shallows and When the Night Comes are two of my favourite books. It meant I had high expectations for her latest, There Was Still Love which is always worrying… for me anyway, but it certainly did not disappoint.

In fact, I posted this on my Facebook page, and was met with great intrigue.

And… It. Is. Utterly. Bewitching.


Prague, 1938: Eva flies down the street from her sister. Suddenly a man steps out, a man wearing a hat. Eva runs into him, hits the pavement hard. His hat is in the gutter. His anger slaps Eva, but his hate will change everything, as war forces so many lives into small, brown suitcases.

Prague, 1980: No one sees Ludek. A young boy can slip right under the heavy blanket that covers this city - the fear cannot touch him. Ludek is free. And he sees everything. The world can do what it likes. The world can go to hell for all he cares because Babi is waiting for him in the warm flat. His whole world.

Melbourne, 1980: Mala Liska's grandma holds her hand as they climb the stairs to their third floor flat. Inside, the smell of warm pipe tobacco and homemade cakes. Here, Mana and Bill have made a life for themselves and their granddaughter. A life imbued with the spirit of Prague and the loved ones left behind.

The prologue of this book was only one page long and consisted of just a few paragraphs. About suitcases. Brown suitcases. And I was smitten. It introduces the recurring theme of suitcases which (I don’t think) is a huge metaphor, but rather a reminder of what we keep locked or hidden away and what we carry and take with us. 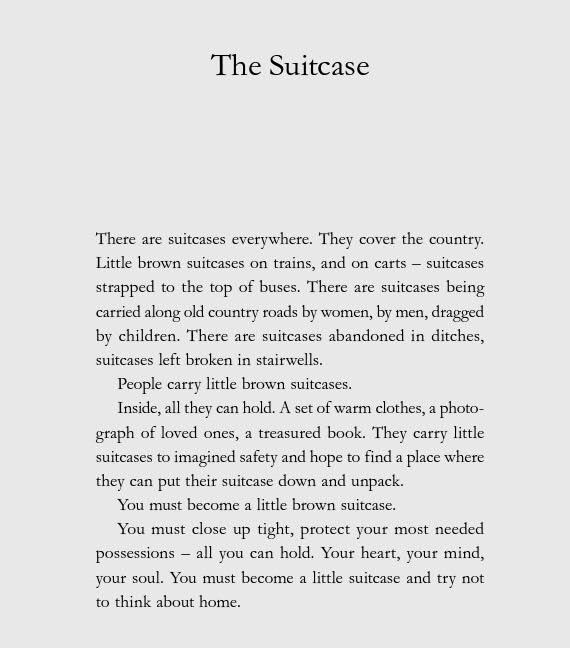 Then we meet a couple of our key characters and I was only on the second page when I was so besotted with the writing I felt obliged to send a message to Parrett via Twitter to tell her. I’ve not met her, but we’ve engaged online so I’m hoping she didn’t think it weird or creepy that I had to tell her how magical her writing was. (Well, is.)

I highlighted paragraph after paragraph.

It’d been a while since I’d read Parrett’s work so I couldn’t remember if her earlier prose had been the same: short eloquent sentences. Some just phrases. But each of them singing.

How can someone pull words together so beautifully I wondered?

I felt envious of Parrett’s talent but not jealous. It’s a bit like being in the presence of some master painter or performer. You know you’re witnessing amazing talent and just in awe.

The story itself deviates from her usual style (well, from her previous two books). It’s essentially about a family – two sisters, torn apart during World War II and the direction their lives have since taken.

Mana is married to fellow Czech Bill (originally Vilem) and lives in Melbourne with their grand-daughter, referred to as Mala Liska (little fox), because of her red hair.

Eva is widowed and still lives in Prague, looking after her grandson Ludoslav (Ludek) whose mother is away performing with The Black Light Theatre. The novel jumps between the 1940s, 1960s and its current day setting of 1980. And even in 1980, she is only allowed to travel with the theatrical troupe providing her son Ludek remains in Prague with his grandmother.

I didn’t find the plot as devastating as Past The Shallows or poignant as When The Night Comes. It is however, a different type of novel.

It’s an homage of sorts. I think. It’s more focussed more on people and their stories more than on events.

Nothing much happens. (Well, in the present.) But I was riveted and this bewitching tale of families impacted by war, by prejudice and having to start lives anew drew me in.

I loved the way Parrett wrote the two children… living parallel lives on opposite sides of the world.. Their lives the same but different. Both living with grandparents, with absent parents and kinda wayward uncles. Appreciative of the love and security they have.

Babi’s hand was on his shoulder now. It was warm and solid and he felt her take it all like always – take the weight, the bad feelings. They lifted off him and sunk down into her large body. They became solid in her flesh.

Parrett dedicates this book to her grandparents and though says much is fictitious it’s also loosely based on her family and actual events of the time.

There’s a strong sense of family. Of home.

It is easy to think somewhere else is better. But when you leave home, there are thing you miss that you never imagined you would. Small things. Like the smell of the river, or the sound of rain on the cobblestones, the taste of local beer. You long to have those things again – to see them, to smell them – and when you do, you know that you are home.  p 86

The stories of Eva, Mana and Vilem (Bill) are sad but uplifting at the same time. Although there’s a strong sense of both regret, resolution and acceptance.

The only way to live now is to keep moving and not look back. It is the only way his heart can keep beating and not break. He must look froward – and never behind.

There’s a reminder too of what many have had to go through, safe finally, so far from home. But still different. I was horrified by a scene in which Mana is the target of a racial slur (it made me cry) but realise this could still happen today.

I did not know what the word wog meant, but I knew that it felt like a giant spotlight suddenly shone on my grandma to make sure that everybody knew she did not belong. To make sure she felt ashamed of her accent, ashamed of her face, ashamed of the way she loved the taste of caraway seeds in her light rye bread. p 139

This is one of the most beautifully-written books I’ve read. And it’s cemented Favel Parrett as my favourite author, in terms of the beauty, eloquence and magic of her words and her ability to stun or quieten me with her simple melodic prose.

I can’t even imagine how honoured and proud Parrett’s grandparents would be to have their lives and those of their fellow countrymen (and contemporaries, as I think Parrett’s grandfather was English) reflected so sympathetically and beautifully.

They spoke in Czech, softly. Voices crisscrossed the room – over and over until I could no longer tell who was talking. They had become one person. A person who had lived two different lives – separated by so much distance – but one all the same. p 203

There Was Still Love by Favel Parrett will be published in Australia by Hachette on 24 September 2019.