West Australian-based author Fleur McDonald has two series featuring outback detective Dave Burrows on the go. One is set in the present and the other in the past – not long after Burrows became a cop. The present day series is interrelated so Burrows is usually investigating a case but there are other characters central to the plot of that particular novel. In the last outing in that series, Starting From Now, we met investigative journalist Zara Ellison, who returned to small-town Barker to be near her dying brother. The likeable Zara stayed and returns to play a lead role here as well.


1980: Rose and Ian Kelly arrive in the small South Australian town of Barker for supplies, before driving a further couple of hundred kilometres to begin shearing at Jacksonville Station. Rose, heavily pregnant with their first babies, worries that despite Ian's impending fatherhood he remains a drifter who dreams of the open road.

2020: When the Australian Federal Police swoop unheralded into Barker and make a shocking arrest for possession of narcotics, Detective Dave Burrows is certain there is more to the story than meets the eye.

After many months of grief over her brother's illness and death, journalist Zara Ellison is finally ready to begin a new chapter of her life and make a commitment to her boyfriend, Senior Constable Jack Higgins. But when she's assigned to investigate the Barker arrest, Jack begins to believe that Zara is working against him.

It takes a series of unconnected incidents in Zara's digging to reveal an almost forgotten thread of mystery as to how these two events, forty years apart, could be connected.

This book opens in 1980 which feels like just yesterday (as I was starting high school), but is apparently 40 years ago. We learn Rose is only 20 but left her family when she fell in love with the Irish shearer. Ian certainly loves Rose but he’s young and loves his mates and the shearing lifestyle just as much. Rose may be young and naive but realises that moving from place to place and sharing accommodation with a bunch of blokes isn’t going to be easy with twins.

And in the present, Dave is suspicious about accusations made against a local grandmother. He has no doubt she’s got some secrets but believes there’s more to the case than the federal police care to consider.

There’s also a bit happening personally for our players here. Although Zara and Jack fell in love in the previous book in this series she’s acting out here, struggling in the aftermath of her brother’s death. Jack can see this but doesn’t know how to help. Of course things get complicated when Jack and Dave are told to stay away from the federal case, and Dave asks Zara to investigate and keep him in the loop.

I liked that McDonald sets much of this novel from Zara’s point of view. She uses the opportunity to consider trauma and our responses. Zara’s obviously in denial that she’s not coping with her brother’s death but her thoughts and actions tell us otherwise.

It’s obvious that there’ll be a link between the two plotlines and we can guess what it is – particularly as McDonald takes us back in time a couple of times to 1980 and Rose and Ian. I must admit I had assumed more menace as a direct result of the distant past rather than what’s offered but McDonald goes down another route to add complexity.

This is another great book in the series. McDonald does a good job with those we meet early in the novel but only gives us enough of the story that we’re left wondering.

I often comment on McDonald’s farming knowledge (and look… I’m quoted on the back cover saying just that!), but here the focus is small-town life and how well we really ‘know’ those we see everyday. 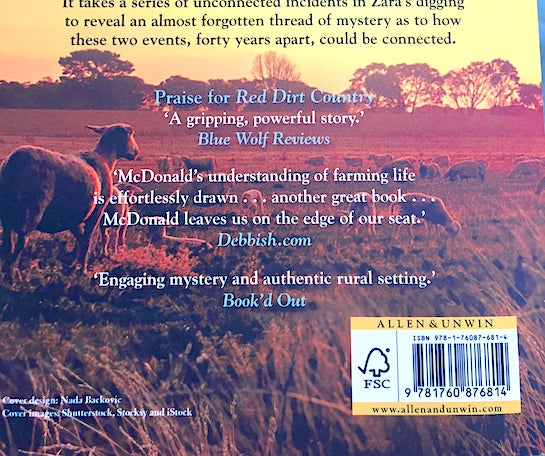 The Shearer’s Wife by Fleur McDonald was published in Australia by Allen & Unwin and available from 3 November 2020.