I came upon this series by Janet Evanovich and Lee Goldberg at number three, but didn’t suffer at all for having missed the first two books… although I am keen to read them at some point. The series is based on a pretty simple— albeit very outlandish—premise, but if you can suspend disbelief then you’re in for a great ride.

Nicolas Fox is a charming con man and master thief on the run. Kate O’Hare is the FBI agent who is hot on his trail. At least that’s what everyone thinks. In reality, Fox and O’Hare are secretly working together to bring down super-criminals the law can’t touch. Criminals like brutal casino magnate Evan Trace.

Evan Trace is running a money-laundering operation through his casino in Macau. Some of his best customers are mobsters, dictators, and global terrorists. Nick and Kate will have to go deep undercover as high-stakes gamblers, wagering millions of dollars—and their lives—in an attempt to topple Trace’s empire.

It’s a scam that will take Fox and O’Hare from the Las Vegas strip, to the sun-soaked beaches of Oahu’s North Shore, and into the dark back alleys of Macau. Their only backup—a self-absorbed actor, a Somali pirate, and Kate’s father, and an ex-soldier who believes a rocket launcher is the best way to solve every problem. What could possibly go wrong? 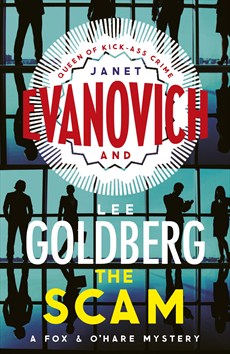 Nick and Kate hit the ground running in this book and readers are quickly entrenched in the action. I was however a little frustrated by their detour from ‘the scam’ by their sojourn to Hawaii and Kate’s father’s antics. The whole (middle of the jungle / helicopter) scenario seemed too over-the-top even in a series which prides itself on OTT sequences. Of course the whole Hawaii thing becomes useful later… but I didn’t know that at the time.

Fortunately the team’s back on task pretty quickly and the pace continues as they attempt to outplay a player (Trace). Naturally their plans are thwarted but they’ve got a backup and the action continues.

Again the characters are great—Nick and Kate continue to complement each other and their witty repartee is both familiar and comforting. And their eclectic support crew manage to be kinda scary and entertaining at the same time.

Readers hoping Nick and Kate eventually get together will be pleased there’s some (ummm…) movement on that front.

I enjoyed this latest outing and (given how it ended…. dum-dum!) am really looking forward to number 5!

The Scam by Janet Evanovich and Lee Goldberg was released in Australia by Hachette on 15 September 2015.