Margaret Drabble’s first novel was published before I was even born. (And that’s saying something given that I’m in my 40s!)

Dame Margaret is an English author and biographer whose novels tend to provide an interesting insight into English life to which many of us (particularly her overseas readers) are often not privy. There’s a sense of ordinariness in her characters and their environs; and her novels often transport readers across a number of decades.

I’ve only read one other Drabble novel (The Peppered Moth) but am aware that most of her protagonists are (usually strong) women who struggle between traditional roles and expectations, and professional ambition. 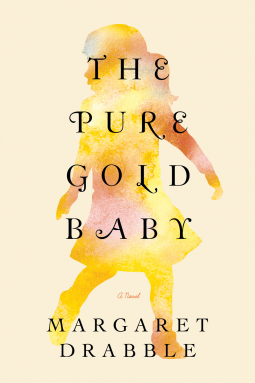 The Pure Gold Baby blurb indicates that anthropology student Jessica Speight – on the verge of a (potentially) brilliant career – finds herself pregnant to her married professor. And I must confess I expected protracted scenes in which student Jess is seduced by a sleazy older man followed by an angst-ridden and bitter break up.

However, (at least in the early part of the novel) we learn little of Jess’s lover and are required to accept her fate and accompany her as she becomes a single mother to Anna, whose sunny disposition and guileless beauty lead to her being described as ‘the pure gold baby’.

The term is more apt than initially thought however, as it becomes obvious that Anna is not ‘normal’ (and yes… I hate that word) or typical.

Jess actually believes it may be her fate to have a child with special needs given her anthropological interest in ‘those who are different’. Indeed she spends much of her life impacted by the memory of children (with clawed hands and feet) playing in a lake in Africa during a University trip.

Anna’s condition is seemingly undiagnosable and I like the lack of label, but it – along with her anthropological calling – lead Jess on (what seems to me to be) a lifelong quest for answers and understanding. 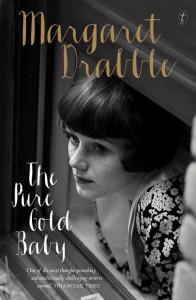 The lives of Jess and Anna unfold through the eyes of a friend – seemingly privy to much of their world. It’s an interesting tale, but you need to be prepared for the lack of direction lest you feel a sense of anticlimax or disappointment. I half expected an event to take place – which would render most of the novel as explanatory – but that didn’t occur. (*And I won’t say what, cos that would be a bit spoiler-ish!)

I tend to struggle a bit with stylistic writers whose work goes ‘nowhere’. But, at the same time I’m drawn to their words and their writing. Anita Brookner comes to mind because – like Drabble – she provides an insight into the minds and lives to which we’d normally not be privy but there’s often no great message or story arc behind her tale.

I realise – of course – that it’s me who’s at fault in this instance. I’m not sure what I expect from a novelist, however I did finish The Pure Gold Baby feeling a little disappointed – but at the same time – richer for the experience, and the exposure to Jess in particular.

Margaret Drabble’s The Pure Gold Baby, published by Houghton Mifflin Harcourt (in the UK) and Text Publishing or via Penguin Australia here in Oz, is available from (today) 1 October 2013.

* I received the novel for review purposes from the publisher.