One of my favourite books of 2014 was the debut novel by journalist and author Lucy Atkins. The Missing One was about a woman’s search to understand more about her distant mother after her passing. I was surprised at how much I enjoyed, it as much of the novel focussed on whales and the tracking of pods. And well… when it comes to flora and fauna I’m frighteningly (though happily) ignorant.

Her second novel features some similar elements. Not the whales this time, but it again centres on someone uncovering the past of one they love… which will ultimately change the way they view the person they thought they knew.

When Tess is sent to photograph Greg, a high profile paediatric heart surgeon, she sees something troubled in his face, and feels instantly drawn to him. Their relationship quickly deepens, but then Tess, single mother to nine-year-old Joe, falls pregnant, and Greg is offered the job of a lifetime back in his hometown of Boston. Before she knows it, Tess is married, and relocating to the States. But life in an affluent American suburb proves anything but straightforward.

Unsettling things keep happening in the large rented house, Joe is distressed, the next-door neighbours are in crisis, and Tess is sure that someone is watching her. Greg’s work is all-consuming and, as the baby’s birth looms, he grows more and more unreachable. Something is very wrong, Tess knows it, and then she makes a jaw-dropping discovery . . . 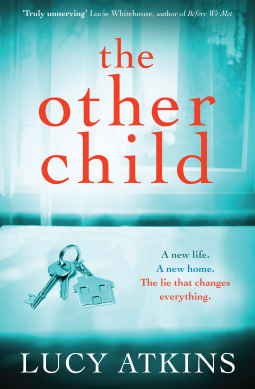 I need to start by confessing that I’d actually been trying to read another book when I opened this on my iPad reader. And it was like a breath of fresh air. It’s not perfect of course, but I read it in a sitting (and skipped dinner to do so!).

We only meet Tess, Greg and Joe once they’ve all moved to the US. We don’t see much of Greg and view him mostly through Tess’s own eyes and through her own perception of what’s happening around them.

Soon after her arrival in the US Tess discovers someone is sending threatening notes to Greg and she sets out to discover more about his past. He lost his family many years before and he’s been loath to talk about them. The threat to her family and Greg’s reluctance to share his history however has her wondering how well she knows the man she married and what secrets he’s keeping.

It’s hard to talk too much about the book without giving too much away. Atkins does a great job of taking readers on a roller coaster of an emotional journey. Tess makes all sorts of assumptions, and we join her in leaping to conclusions only to discover we may well be wrong. I liked Tess but did sometimes find her character a tad rigid. I think Atkins has written her that way on purpose and because of that I was a little torn about her stance in the end.

It’s a novel of suspense which forces us to accept that secrets might not always be sinister and that people aren’t always beyond redemption. It’s also one which has had me pondering on it long after I turned the final page.

The Other Child by Lucy Atkins was released via Quercus Books in June 2015.