I’ve long been a Mary Higgins Clark fan. Indeed – my love of her work dates back to the early 1990s when her novels seemed different and quite cutting-edge. Before heading into the bath with the book I joked on Facebook about reading MHC, saying I’d be revisiting Barbara Taylor Bradford next. Of course it wasn’t until I really thought back to my reading habits of the 1990s I remembered that it was (in fact) a time I discovered Joy Fielding, Elizabeth George, Martha Grimes, Patricia Cornwell and of course MHC.

I believe Cornwell went off the rails at some point a decade or so ago and haven’t read any of her work in a long long time, but MHC continues to deliver quality reading fodder. There’s something a little similar about all of her books: love and betrayal (domestic noir perhaps) but that’s kinda okay cos (I know) her work is more likely to be translated into a TV movie than an Academy Award winner. And that’s okay too.

Lane Harmon, assistant to a renowned interior designer, is used to meeting the rich and famous in their opulent homes. But when she is called to the Bennett house, she knows this job will be different. Parker Bennett has been missing for two years – since just before the discovery that billions of dollars had vanished from a fund he managed. The scandal has not died and a cloud of suspicion remains around his name. Did he commit suicide or was his disappearance staged?

His wife is convinced Parker is innocent – and alive. But there are people after him who are determined to learn the truth at any cost. And the more Lane gets drawn into the Bennett’s world of glamour and intrigue, the most she puts her life and those of her family in jeopardy… 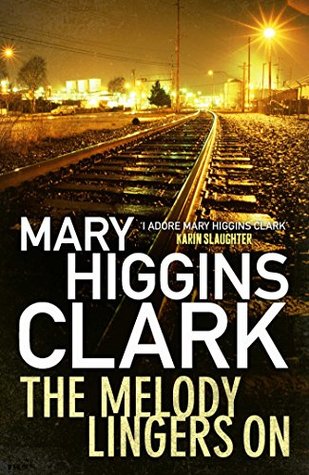 I’ve been cheating of late and using the publisher’s blurb instead of summarising the book myself… and sometimes that’s okay. I can’t be bothered rewriting the whole thing (above) but this blurb leaves out a very important element—Eric Bennett—Parker’s only child who woos single mother Lane. Eric’s come under A LOT of scrutiny since his father disappeared. There’s no evidence he was (in any way) involved, but those cheated out of their life savings, along with the FBI (which continues to sniff around the case) remain suspicious.

I’ve actually read at least three books about wealthy men maybe or maybe not faking their disappearances after swindling money in the last year. Nora Roberts’ The Liar comes to mind, as does Laura Lippman’s After I’m Gone.

We learn of Parker’s fate relatively early in The Melody Lingers On. The suspense centres around the money he may have embezzled and the involvement of those left behind.

The novel is well-paced and MHC keeps readers on our toes. Lane is a great character and I LOVED her eccentric and high-maintenance boss Glady. The latter was incredibly insightful and hilariously blunt. In fact, I’d love to meet her again in another of MHC’s outings. And while Eric is great with Lane’s daughter and quickly develops feelings for Lane but we can’t help but wonder why others dislike him so.

MHC fans will not be disappointed with her latest novel. It has all of the elements we’ve come to expect in her work. (And for me a good balance between romance and suspense!)

The Melody Lingers On by Mary Higgins Clark was published in Australia by Simon & Schuster on 1 July 2015.

Are you a Mary Higgins Clark fan?