The word itself might evoke images of Raymond Chandler’s Phillip Marlowe or Mickey Spillane’s Mike Hammer. Of trench-coated, chain-smoking detectives speaking unintelligibly out of the corners of their mouths.  Of private eyes (PIs)…. almost irrelevant and unfashionable in today’s high-tech world.

It seems today that a lot of contemporary writers create crimes involving the macabre, and focus on the specialist skills of those tracking down the baddies.  As a result, on our bookshelves and small and big screens, we’ve seen the rise of the coroner, crime scene investigators and criminal profilers with a few cold-case specialists thrown in.

I really didn’t notice this shift as I moved along with the masses, indulging in the type of reading fodder to give a girl nightmares.  In fact, because I occasionally indulged in a sprinkling of PI Kinsey Millhone, compliments of Sue Grafton’s alphabet series, and Janet Evanovich’s Bounty Hunter Stephanie Plum, I didn’t really notice that most of the crime fiction I was reading featured the grisly and gruesome.

That is, until a few years ago while desperately picking through the crumbs of my local library’s fiction shelves, when I discovered Spenser (gumshoe / PI / private dick) and his world created by American and Raymond Chandler-aspirant, Robert B Parker. 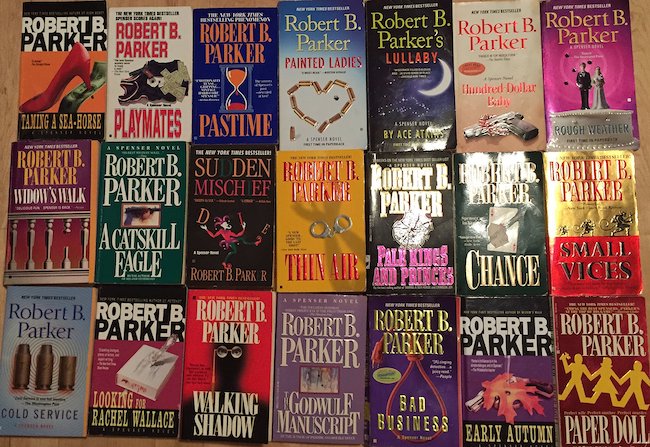 It was at this point I stopped to ponder on the fate of the simple whodunit.  Was the folkloric gumshoe, I wondered, out-of-pace and irrelevant; like Britney Spears and notebooks in a world of Lady Gaga and iPads?

For me, discovering Spenser and (more importantly) Parker, reignited my interest in the simple – but by no means boring – murder/mystery.  It was then I realised that the art of the gumshoe was not really lost.  Just misplaced among the sexier crime-fighters – the coroners, lawyers and FBI agents.

Parker first introduced Boston PI, Spenser in 1973 in The Godwulf Manuscript.  Spenser IS the archetypal gumshoe.  Smug, wise-cracking with a strong sense of right and wrong (though slightly off-centre code of ethics), Spenser is a man of honour in his world of thieves, and thugs, and mobsters, and…. well, you get the point.

An ex-boxer, we quickly learn that Spenser is as good with his fists as he is with his gun and his wit – although the latter isn’t always appreciated by his protagonists.

Spenser’s relationship with his best friend Hawk is an interesting one and their characters and dialogue bounce off one another throughout the series.  One will gladly kill (and they often do) without hesitation or sense of recourse, for the other.   Hawk, whose actual profession is vaguely described only through its illegalness, seems devoid of any moral compass but abides by Spenser’s unusual rules of engagement.  Together they are magic.  Their trash-talking draws me in.  And… I may be a little in love with Hawk.  Despite the lawlessness.

What Robert B Parker and Spenser offer is an escape into an unimaginable world.  Unless of course you hang with mobsters and pimps.  A world where the wise-cracking hero doesn’t always solve the crime, sometimes gets paid in donuts, but usually gets an outcome that allows him to sleep at night.  Justice has many forms in Spenser’s world.

Check out The Lost Art of the Gumshoe Part 2