I’ve long been breaking my own (somewhat irrational) reading rules when it comes to Kate Morton. Back when I didn’t read Australian authors, or books set in Australia I made an exception for her books… telling myself it was because they were usually (at least partially) set overseas. Similarly, I’ve enjoyed her books DESPITE my usual antipathy towards historical fiction. And again I’ve wondered if it’s because her books straddle contemporary and historical fiction—unfolding in multiple timeframes.

Or perhaps it’s just because she’s a fabulous storyteller.

I described her books to a friend recently. I explained they were all quite similar: sweeping tales crossing several time periods and involving family secrets—with an element of romance and a whisper of mystery.

My friend’s next question…. “Are they formulaic then?”

I pondered because—they kinda are—but in a way that’s become Morton’s signature style than anything too predictable.

June 1933, and the Edevane family’s country house, Loeanneth, is polished and gleaming, ready for the much-anticipated Midsummer Eve party. Alice Edevane, sixteen years old and a budding writer, is especially excited. Not only has she worked out the perfect twist for her novel, she’s also fallen helplessly in love with someone she shouldn’t. But by the time midnight strikes and fireworks light up the night skies, the Edevane family will have suffered a loss so great that they leave Loeanneth forever.

Seventy years later, after a particularly troubling case Sadie Sparrow is sent on an enforced break from her job with the Metropolitan Police. Sadie retreats to her beloved grandfather’s cottage in Cornwall but soon finds herself at a loose end. Until one day, she stumbles upon an abandoned house surrounded by overgrown gardens and dense woods, and learns the story of a baby boy who disappeared without a trace.

Meanwhile, in the attic writing room of her elegant Hampstead home, the formidable Alice Edevane, now an old lady, leads a life as neatly plotted as the bestselling detective novels she writes. Until a young police detective starts asking questions about her family’s past, seeking to resurrect the complex tangle of secrets Alice has spent her life trying to escape… 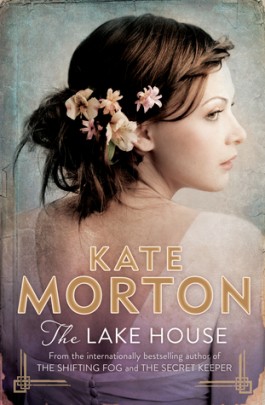 There is no doubt that Morton writes beautifully. I’m not swept away by her prose as I am by the likes of Anita Brookner, Anna Smaill or Paulo Coelho (et al) however. Morton writes with her readers in mind.

Alice felt the nag of an unspecified regret and sighed deeply. She supposed it was being in love that made her feel this way, a sort of general pity for everyone that wasn’t her. p22

Her words and turns of phrases are lovely. But simple.

Talking to him is like writing in the sand or shouting into the wind. His nature is so elemental that I know I can tell him anything and it will go no further. p525

Morton’s biggest talent is that she is a masterful storyteller. She has the ability to lure readers into her world. She obviously feels great affection for her characters and we too cannot help but care deeply about them.

In The Lake House we meet the young and ‘old’ Alice and I love how Morton’s aged her in a way that she hasn’t lost her feistiness but has developed a sense of cynical pragmatism her young self was missing. And of course, we completely understand Sadie’s need to get to the bottom of the 70yr old mystery and her longing for a sense of closure she’s missing in her own life.

I wasn’t entirely convinced by one of the twists at the end. It was something which occurred to me earlier in the novel but I decided Morton wouldn’t make such a nonsensical leap. She did. And though it annoyed me, it worked nonetheless. And in her defence there’s a theme running through the novel about ‘coincidence’. Which this twist most certainly is.

The Lake House by Kate Morton is available via Allen & Unwin (in Australia) from 21 October 2015.