In addition to having a very long title, The Inaugural Meeting of the Fairvale Ladies Book Club by Sophie Green has something for everyone. Well, when I say everyone, I’m assuming most readers will be female. Just cos.

But young / old; married / single; city dweller / country gal, you’ll most certainly find yourself identifying with one or more of the five women featured in this novel as they’re all relatable, likeable and very very real.


In 1978 the Northern Territory has begun to self-govern. Cyclone Tracy is a recent memory and telephones not yet a fixture on the cattle stations dominating the rugged outback. Life is hard and people are isolated. But they find ways to connect.

Sybil is the matriarch of Fairvale Station, run by her husband, Joe. Their eldest son, Lachlan, was Joe's designated successor but he has left the Territory - for good. It is up to their second son, Ben, to take his brother's place. But that doesn't stop Sybil grieving the absence of her child.

With her oldest friend, Rita, now living in Alice Springs and working for the Royal Flying Doctor Service, and Ben's English wife, Kate, finding it difficult to adjust to life at Fairvale, Sybil comes up with a way to give them all companionship and purpose: they all love to read, and she forms a book club.

Mother-of-three Sallyanne is invited to join them. Sallyanne dreams of a life far removed from the dusty town of Katherine where she lives with her difficult husband, Mick.

Completing the group is Della, who left Texas for Australia looking for adventure and work on the land.

The print copy of this book was still on my TBR pile when I received a listing of new Hachette audiobooks and so I leapt at the chance to ‘listen’ to the book as I had several looooong drives ahead of me and have found audiobooks (and podcasts) help pass the time efficiently (as if the time / space continuum gets a kick up the butt… albeit briefly).

However… it has to be said, I’m still not completely won over by the audiobook phenomenon.

My first drive – a work trip – involved 3.5 hrs each way to a meeting. And though I was enjoying the Fairvale ladies, their lives and their books I realised – after over 6 hrs of listening – I wasn’t yet halfway through the book.

One of my planned trips to Brisbane fell through so I missed out on another 6 hrs in the car…. but a few short drives (30mins each way) to my mum’s hometown and 3 longish walks and I discovered I ‘apparently’ only had  3 hrs to go.

So, when I woke early today I picked up the actual book and was agog to see how close to the end I was. 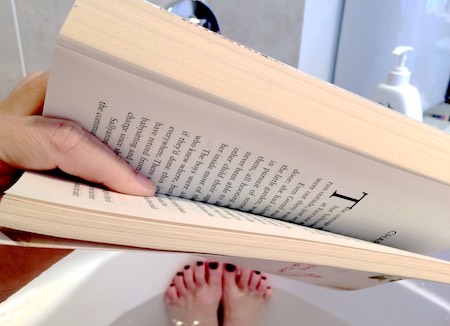 Audiobooks help pass the time when you’re doing boring stuff. While I’m on the positives, I should mention the narrator of this book, Fiona Macleod, was great and was easily able to switch between Della’s Texas drawl, Kate’s English accent and the speech patterns of the book’s Indigenous characters.

But audiobooks just take so bloody long. I’ve mentioned before I can’t have a book on in the background when I’m doing something that requires thought. So driving and walking is fine, but that’s it! 😉

Someone recently told me about audiobooks that you receive simultaneously as eBooks and you can switch modes. Now THAT would be perfect for someone like me. Cos the last 3 hrs of the book – that might have taken me several weeks to get through – I read in about 30mins in the bathtub at 6am this morning.

But back to the book itself. I hadn’t read the backcover blurb so it took me a while to realise this was set in the past and I was enchanted by the memories of ‘party lines’ (phonelines that many people shared) and the concept of the ‘lady’ at the telephone exchange who put your calls through.

And then there were reminders of past events scattered throughout (Skylab crashing to earth, Ronald Reagan becoming President, Diana and Charles getting married) – annual milestones Green included between ‘years’. (Which I must confess confused me initially in the audiobook as – without the visual layout of the book – I thought we’d fast-forwarded a year and hadn’t realised it was setting the scene for what was to come.)

Green takes each of the women in the story on a journey. Each has their own (but intertwined) story arc and – although most end happily – not all do and we’re reminded that life takes unexpected turns.

The book’s very much centred around the concept of ‘family’ – either the one we’re born into or ones we make ourselves. And it touches on relationships, love, loss and grief and we’re reminded of how the world has changed and the impacts that technology and access to information have had on our daily lives, but also on our beliefs and societal norms.

It’s obvious Green loves the Northern Territory and the land. I note she thanks someone for their insight into the terrain and the place, but – through her characters – there’s a real appreciation for the beauty AND the harsh reality of the vast emptiness, of the impacts of distance and inaccessibility and the mighty power of mother nature.

I know it’s a cliche, but it needs to be said…. the book will certainly appeal to bookclubs. But Green kindly adds notes at the end about the books the women have read and referenced (and there are some great Aussie literary icons); and includes bookclub conversation starters about the book. About a bookclub.

The Inaugural Meeting of the Fairvale Ladies Book Club by Sophie Green was published in Australia by Hachette and is available via Audible.