Sarah and Angus Moorcroft have the perfect life. And the perfect family. They’re the envy of everyone they meet. They’ve got great jobs and gorgeous blonde blue-eyed identical twins, 6 yr olds, Lydia and Kirstie – not to mention a loveable matching dog. And then tragedy strikes and Lydia dies in an unfortunate accident.

We meet the family about fourteen months later and things aren’t going well. We eventually learn that Sarah all-but-shut-down after Lydia’s death; Angus started drinking heavily, punched his boss and lost his job; and Kirstie is a shell of her former self. 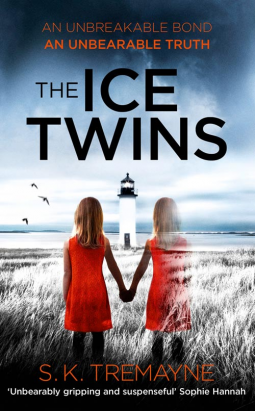 The almost-broke couple decide to pack up their life and move to a small isolated Scottish island Angus inherited from his grandmother. Both Sarah and Angus believe the change is what they need and they convince Kirstie that things will get better. However, as they’re packing and preparing to move Kirstie very suddenly corrects her mother one day, informing her that she is – in fact – Lydia and it was Kirstie who died the year before.

Sarah hides Kirstie’s assertion from Angus who she doesn’t believe will cope with another shock. However, once they arrive on the island Kirstie’s behaviour becomes increasingly bizarre as does her adamance that she is Lydia.

Sarah and Angus’s marriage is already crumbling under the weight of one tragedy, neither are sure it will last more upheaval.

It’s hard to describe The Ice Twins  without giving too much away. It’s described as a ‘terrifying psychological thriller’. I did not find it terrifying. Rather, I found it intriguing. I kept jumping to conclusions along with Sarah and Angus and their friends and family.

Is Lydia / Kirstie suffering from trauma and hallucinating?
Is Lydia / Kirstie a manipulative,  dangerous and older-than-her-years 7r old?
Or is Kirstie / Lydia haunting (or comforting) her sister via her ghostly presence.

I had LOTS of questions. So I kept reading and reading. Until I turned the last page.

The novel mostly unfolds in first person from Sarah’s perspective, with only some scenes shared from Angus’s viewpoint. Sarah’s a great lead and Tremayne’s done a good job at ensuring we’re privy to her every thought as she tries to understand what’s happening to her family.

Tremayne also makes use of the desolate setting of the island in winter and the descriptive imagery is quite powerful. And bleak. Tremayne also very expertly releases snippets of information as if drip-feeding clues to readers.

It’s interesting as this is now the third novel I’ve read for which I’ve had to say I didn’t ‘love’ the ending. I’m shortly publishing a review of Lisa Unger’s Crazy Love You  and recently reviewed Fleur Smithwick’s How To Make A Friend  – and I felt slightly dissatisfied with the ending of each for the exact same reason. Each took the novel to a place I wasn’t quite sure I liked. But that’s more about me, than the books themselves!

As I said, I read this book in a sitting. The blurb in the novel talks about Tremayne as a bestselling author but I couldn’t find reference to other work and… the blurb is very careful not to use pronouns. Which naturally means I’m kinda intrigued. Ending aside, a great page-turning read!

I received a copy of this book from the publisher for review purposes via NetGalley.