AJ Rich is the pseudonym of Amy Hempel and Jill Ciment. Both have books under their belts but this is their first published collaboration*.

Morgan’s life seems settled – she is completing her thesis on victim psychology and newly engaged to Bennett, a man more possessive than those she has dated in the past, but also more chivalrous and passionate.

But she returns from class one day to find Bennett savagely killed, and her dogs – a Great Pyrenees, and two pit bulls she was fostering – circling the body, covered in blood. Everything she holds dear in life is taken away from her in an instant.

Devastated and traumatised, Morgan tries to locate Bennett’s parents to tell them about their son’s death. Only then does she begin to discover layer after layer of deceit. Bennett is not the man she thought he was. And she is not the only woman now in immense danger. 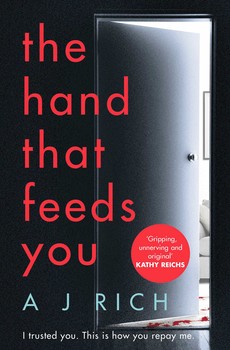 I enjoyed this first novel by the Hempel / Ciment collaboration. It’s got a strong psychological thriller bent and if I was less lazy I’d do some research into the authors’ backgrounds as I wonder if either have a background in psychology (or just a penchant for the underlying theory).

Given Morgan’s studies she’s mortified she’s been ‘played’ as she’s supposed to be able to recognise the players. But she fails… more than once. As well as her thesis topic, we’re privy to Morgan’s discussions with her therapist: their analysis of Bennett’s behaviour; Morgan’s own risk-taking behaviour; and the other women who’ve been / are involved with the man Morgan knew as Bennett and who—incidentally—are dropping like flies.

I did kinda guess the ‘whodunnit’ fairly early on in this novel but the why and how were a nice surprise. And even when we know the ‘who’ readers are kept on our toes because the villain in question is smarter than Morgan expects them to be.

Morgan’s a well-developed, likeable and complex character and there’s a strong support cast.

Overall the novel wasn’t entirely what I was expecting and I’m not sure why other than a sense that perhaps there were a few untapped moments which could have transformed this from a good book into a great book.

My only tangible criticism is that the very last part of the book was wrapped up a little too quickly. The pace was off and we were offered a summary of sorts. We’d journeyed alongside Morgan for 266 pages and for things to be wrapped up in less than two (2) pages was a tad frustrating and huge anticlimax for me.

Nevertheless this was a book I enjoyed and I look forward to more from these collaborators.

The Hand That Feeds You by AJ Rich was published by Simon & Schuster in Australia and available from 2 July 2015.

*I should note there’s mention of a 2014 novel by ‘AJ Rich’ but I’m not entirely sure if it was published.