In all honesty I have no idea at all if I’ve read any of the Will Robie series by David Baldacci. In fact, I didn’t know it was a series until I discovered my latest arrival, The Guilty, was number four.

I inwardly groaned and hoped I didn’t struggle with the book given my lack of backstory…. or get bored to tears with too much provided.

However, I could rest easy as Baldacci popped in a little backstory but also wrote to me… ahem… us, explaining that he was taking his character off-course to deal with some unresolved family issues. I’m not sure the letter was necessary but kind nonetheless. I’m kinda used to my characters going back to deal with life-changing childhood issues.

But… first we meet CIA assassin Robie in his current work environment in an operation which doesn’t go as expected and results in collateral damage in a form which disturbs the professional killer.

At the same time he discovers his father (a former marine who knocked Will around as a kid and who Will hasn’t seen since he left home at 18) is being held in his hometown on a murder charge. 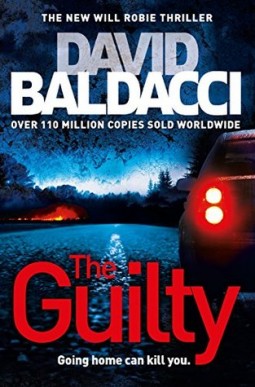 Unresolved baggage on his mind Will heads to his hometown for the first time in over 20 years where he’s confronted with memories of his first (lost) love, his parent’s marriage breakdown and friends who believe he walked out on them.

He’s surprised to find his father had become the town judge, but an unpopular one given his antipathy towards discriminatory practices still prevalent in Mississippi. And now he’s accused of murdering a lecherous (albeit wealthy and high-profile) town drunk who was recently found innocent of the murder of a young girl.

Naturally all is not as it seems and Will’s in for a number of surprises when it comes to his father’s personal life. And just to keep him (and we readers) on his (our) toes Will also becomes embroiled in a FBI investigation and local power struggles.

Regular readers will be pleased fellow agent (and assassin) Jessica Reel make an appearance and I enjoyed the hardened lack of sentimentality (and humanity) we usually only find in similar male characters.

I got seriously sucked into this book and could not put it down, reading it in a sitting.

It’s well paced and complex with a lot happening which all comes together very nicely at the end. (And you know how much I love closure!)

The Guilty by David Baldacci is published in Australia by Pan Macmillan and now available.