This is pegged as a ‘gripping psychological thriller for fans of Gone Girl and Girl on the Train‘. Long-term readers of my blog know how much I groan when GG is mentioned as a point of reference. Sigh.

However… the ‘gripping psychological thriller’ part is most certainly valid and despite my superior powers of deduction (?!) The Girl with No Past offered quite a few surprises for this jaded reader-of-psychological-thrillers.

Leah Mills lives a life of a fugitive – kept on the run by one terrible day from her past. It is a lonely life, without a social life or friends until – longing for a connection – she meets Julian. For the first time she dares to believe she can live a normal life.

Then, on the fourteenth anniversary of that day, she receives a card. Someone knows the truth about what happened. Someone who won’t stop until they’ve destroyed the life Leah has created.

But is Leah all she seems? Or does she deserve everything she gets?

Everyone has secrets. But some are deadly. 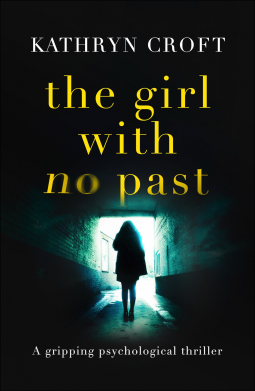 The Girl With No Past unfolds in multiple timeframes, and Kathryn Croft cleverly ekes out the events of 14 years earlier. It’s not an uncommon approach but interesting given readers are kept in the dark for much of the novel about exactly what happened (back then).

Leah is a prickly character and (as the blurb says) it’d be easy to think she’s getting what she deserves… however we remain unsure of that. Until the end.

Croft does a great job with Leah and she’s a complex and slightly-bewildering character. She’s flawed and has possibly done something terrible, but her self-flagellation means it’s hard to really hate her.

Her interaction with potential online beau Julian, confidante Ben and work friend (or frenemy?) Maria all offered some insight into her dichotomous world. On one hand she’s isolated herself from everything and everyone; on the other she’s yearning for some affection or kindness.

I wasn’t entirely convinced by the ending (and yes, I know I’m hard to please!); I was surprised by the ‘who’, but the ‘why’ didn’t entirely make sense.

However for me, this book offered something a little different: a lead character we’re unsure whether we’re allowed to like, or not. If you’re similar to me, you’re tempted to dislike her but can’t quite bring yourself to do so!

The Girl With No Past by Kathryn Croft is published by Bookouture and available from 15 October 2015.