One of the most comforting things about Paula Hawkins’ The Girl on the Train  is that I felt so much better about my own foibles, failings and life in general. Cos, quite frankly, Rachel – THE girl on the train – is pretty much a mess.

We learn this early on as she’s on her daily commute, sneaking booze on the trip home each evening (which isn’t usually her first drink of the day) and struggling with a hangover each morning.

Rachel’s commute takes her past her former house – one she lived in with her ex-husband who left her for his former mistress. Tom is mostly kind and patient with Rachel – much to his new wife Anna’s chagrin – but is pretty unflinchingly self-centred when it comes to blame for their marriage breakdown.

Rachel, struggling to deal with their failed attempts at IVF and a lack of sympathy from Tom, started drinking. Tom claims he looked for solace (in Anna) only after Rachel’s behaviour got entirely out of control.

Two years on, Tom, Anna and their baby (yes, their baby!)  live in Rachel and Tom’s old house. 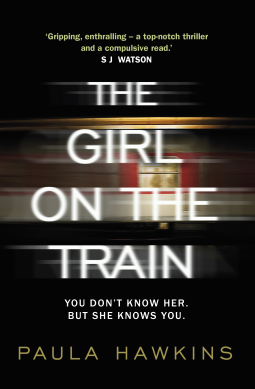 They’ve moved on but Rachel can’t; drunk-dialling or emailing Tom when she knows she shouldn’t.

Rachel takes solace in her daily commute watching a young couple who’ve moved in down the road from her old house. In her mind Rachel develops a fantasy life for the happy couple (she names Jason and Jess), so she’s disturbed when she sees ‘Jess’ embracing another man.

And for reasons even Rachel can’t explain she stumbles over to their neighbourhood very drunk one evening. The next thing she remembers she’s back home in bed, bloodied and sick.

Rachel soon discovers that Jess (whose real name is Megan) has been reported missing and realises she was in the vicinity at the time. With no memories of the evening Rachel finds herself wondering if she witnessed anything or perhaps even played a role in Megan’s disappearance?

Inexplicably Rachel inserts herself into the investigation coming up with lie after lie to explain her interest. Before she knows it she’s become part of the story and understandably, the main suspect. It’s a turning point for Rachel and she ‘attempts’ to get her drinking and behaviour under control.

Rachel’s an interesting protagonist – obviously flawed and EXCEEDINGLY frustrating. However… much of the novel is written from Rachel’s viewpoint so we easily become attached to her and her ummmm… challenging behaviour and self-sabotaging tendencies.

The support cast – Tom, Anna, Megan and her husband Scott and Rachel’s long-suffering flatmate Cathy are all complex characters and add a lot of texture to this novel. Readers will find themselves both hating and sympathising with most of the characters at the same time.

The narrative’s really accessible and written in first person from the viewpoints of Rachel, Anna and Megan across several timeframes.

The blurb about this novel describes it as Gone Girl  meets Rear Window. Which is true. Kinda literally.

Hawkins does a great job of progressively offering readers tiny snippets of information. I’ve probably given away more of the plot than I should however, we learn the basics (shared above) pretty quickly.

The final product is an interesting thriller with heaps of unexpected twists and a climax which will have readers on the edge of their seats.

I have to admit I didn’t like the VERY end of this novel, which marks it down slightly from 4 stars to 3.5 stars for me, but that takes nothing away from the fact that this is a fabulous debut novel. I think it’d translate really well onto the screen so wouldn’t be surprised to watch this at some point in the near future.

The Girl on the Train by Paula Hawkins will be released via Random House UK (Transworld Publishers) in January 2015.

I received an advance copy of this book for review purposes from the publisher via NetGalley.

Buy now from Amazon: The Girl on the Train: A Novel