Daniel hasn’t seen his parents since they retired from the UK to Sweden. An only child, Daniel’s childhood was a harmonious one with his supportive and hard-working parents, so — in the absence of any extended family — the three have remained close.

It’s six months since his parents migrated and Daniel’s deferred planned visits to their Swedish farm to avoid telling his parents he’s gay. His reasons for not telling them reveal something about their relationship – he’s not worried they won’t accept him or his sexuality; rather he’s worried they’ll wonder why on earth he didn’t tell them sooner and believe they’ve failed in raising him to believe in their unconditional love. He doesn’t want to break their hearts in that way – such is the sweet interdependence of their love and relationship.

Although they’ve kept in close contact Daniel’s surprised to get a call from his father telling him his mother’s been committed into a psychiatric hospital and making all sorts of weird allegations about him and others in their new community.

A gobsmacked Daniel’s about to fly to Sweden when his mother calls; she’s been released from the hospital she says, claiming his father has been involved in illegal activities and had her ‘locked up’ to discredit her. 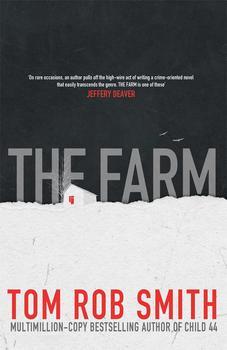 Nothing in Daniel’s past could have prepared him for what’s about to happen. He awaits his mother’s arrival and then listens as she methodically shares the happenings of their time in Sweden and her own suspicions about his father and others in the community.

Not only does his mother dispel Daniel of his perceptions of their retirement, but he learns of secrets kept from him for his entire life.

I gather The Farm  is quite a departure from Tom Rob Smith’s previous and much celebrated work, and note his own experiences inspired this novel. Which I guess, is why it feels so real. And surreal. All at once. It’s hard not to insert yourself into the same predicament and wonder what you’d do.

There are a range of possible factors at play in The Farm,  but it’s hard to talk too much about it without giving a lot away. And it’s the constant surprises which makes the book so engrossing.

We readers – like Daniel — are torn between the impossible: his mother’s ‘break’ with reality for no particular reason; or the fact his father’s done the things of which he’s accused. It seems there can be no middle ground.

Of course there are other players and elements to his mother’s tale – a wealthy landowner and the disappearance of his daughter; and his mother’s childhood in Sweden and reasons she left so many years before.

The book wasn’t at all what I expected. It touches on a huge array of issues, such as relationships, families and unconditional love; on secrets and their impact; and mental illness.

Something I pondered later was whether mental illness is more ‘palatable’ to many if there’s an identifiable event or cause; as opposed to physiological or other reasons. I’m not sure if this was the case in the novel. Perhaps, but I do enjoy a good head-worm* after I finish reading. #not #insomnia

The Farm  wasn’t exactly a page-turner in the sense of a traditional thriller or (life and death) suspense novel, but it was most-certainly intriguing and finally — kinda sad.

The Farm by Tom Rob Smith was published in Australia by Simon & Schuster and is available from all of the usual places.

If you’re keen to see him, Tom Rob Smith is currently in Australia (before heading to NZ) to promote the upcoming film based on his book, Child 44.

* Like an earworm (a tune which gets stuck in your head), I’m inventing the head-worm — when an idea or thought continues to plague you, long after it should!