Mary Higgins Clark first introduced us to Laurie Moran in I’ve Got You Under My Skin. Laurie hosts a cold case TV show ‘Under Suspicion’ which – in its first episode (in the first novel) – helped uncover a murder… and eventually offered some ‘closure’ for Laurie whose husband was killed five years earlier.

In this new series MHC is joined by featuring Alafair Burke (a fave author of mine) who adds her legal mind and criminal expertise to MHC’s passion for suspense. 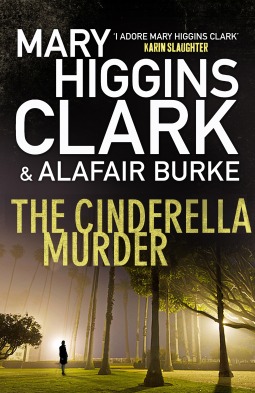 Susan Dempsey’s death was known as the ‘Cinderella Murder’ because her body was found with one shoe missing.

She was murdered at the time the 19 year old was supposed to be at an audition with an up-and-coming movie director and although he claims she didn’t arrive, her car is found nearby. Her (then) boyfriend however – who later achieved ‘some’ fame himself – was the main suspect at the time, but nothing was proved.

Twenty years later the case is cold with only Susan’s mother Rosemary pushing to reopen the case and find the killer.

Laurie believes the case would make interesting television and manages to get all players on board for a re-enactment and raft of interviews. Charismatic lawyer (and Laurie’s potential love interest) Alex Buckley again returns to assist but – as is often the case when you dig up the past – Laurie and her team discover the case is no longer as ‘cold’ as they’d assumed.

Naturally there are a heap of surprises – Susan’s best friend’s reticence, her former fellow student now tech billionaire’s extreme interest in the case, long not-forgotten infidelity – and the possible involvement of a powerful religious group.

The Cinderella Murder  is a solid first in this new series. Laurie along with her father and son, her quirky TV team and Alex are all likeable and engaging characters. The plot itself offers a good balance of murder, mystery and mayhem and the promise of potential romance between Laurie and Alex.

I’m looking forward to more in this series. And I’m assuming each novel in this new Under Suspicion  series will centre around a cold case to be featured on the TV show so our beloved characters will hang around for a while, but there’ll be some new blood offered via the players in the case under consideration.

The Cinderella Murder by Mary Higgins Clark and Alafair Burke will be released in mid November 2014 via Simon and Schuster.

I received an electronic copy for review purposes via NetGalley from the publisher.