My favourite book of 2017 was the fabulously clever, quirky and addictive Eleanor Oliphant is Completely Fine by Gail Honeyman. In fact many of my favourite books feature eccentric characters – sympathetically created and directed, and beautifully written.

The Cactus by Sarah Haywood came as a complete surprise as I’d heard nothing about it but found the lead character, Susan Green almost as prickly-ly loveable as Eleanor. In that – god they’re annoying but endearing – kind of way!


People aren't sure what to make of Susan Green - a prickly independent woman, who has everything just the way she wants it and who certainly has no need for messy emotional relationships.

Family and colleagues find her stand-offish and hard to understand, but Susan makes perfect sense to herself, and that's all she needs. At forty-five, she thinks her life is perfect, as long as she avoids her feckless brother, Edward - a safe distance away in Birmingham. She has a London flat which is ideal for one; a job that suits her passion for logic; and a personal arrangement providing cultural and other, more intimate, benefits. Yet suddenly faced with the loss of her mother and, implausibly, with the possibility of becoming a mother herself, Susan's greatest fear is being realised: she is losing control.

When she discovers that her mother's will inexplicably favours her brother, Susan sets out to prove that Edward and his equally feckless friend Rob somehow coerced this dubious outcome. But when problems closer to home become increasingly hard to ignore, she finds help in the most unlikely of places.

Like Eleanor Oliphant, Britt-Marie was Here, The Rosie Project and Elizabeth is Missing I have endless quotes I’m keen to share with you. All of which will give you an idea of who Susan is. And how beautifully Haywood portrays her… without needing to describe her at all. Indeed, the book’s written in first person – from Susan’s point of view and she’s seemingly unaware of her (ahem) tendencies.

Just after the book opens Susan’s at work…

If it wasn’t for the fact that I have colleagues, office life would be bearable. p6

She’d most certainly garner a number of eyerolls each day but I love the way her boss handles her. Susan tells us of the various suggestions she makes to improve on workplace efficiency; and her boss amiably responds by suggesting Susan set aside a time each week to approach her with her various grievances and ideas…. also in the name of workplace productivity.

On (re) meeting a friend of her brother…

Now he was upright I couldn’t help noticing how ridiculously tall he was. Some people might find such height attractive but, as far as I’m concerned, anything over six foot is excessive and smacks of attention-seeking. pp 29-30

Despite her prickly and self-absorbed nature Susan has a kind heart. After making a lot of judgements about her seemingly-scatty neighbour Kate, who has a 2yr old and a newborn, the pair become unlikely friends.

Initially though, she’s uncertain about Kate’s mothering skills and decides her own child will be different.

The baby will have inherited my genes, and I’d therefore expect it to be reasonable and moderate in its behaviour. p 76

In fact, I shared (on social media) one of my favourite sections from the book which summed Susan up in a paragraph-long nutshell. She’d found herself unexpectedly babysitting 2yr old Ava and, after breakfast, decided to embark on her pre-planned day’s activities… 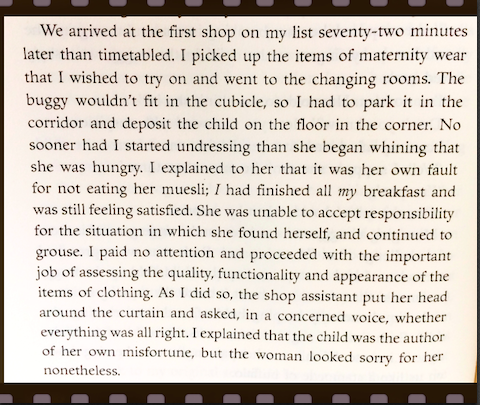 In many ways this book is character-driven, but the unfolding plot around Susan’s mother’s death provides a story arc that gives us the conflict / crisis that throws Susan’s life into disarray (think straw: camel’s back).

Her prickly nature, social ineptitude and inflexibility seem to have been formed over time. We learn of a former fiancé; her alcoholic father; her mother who clearly favoured her brother; and her indulged brother who seemed determined to spite Susan at every opportunity… all of which combined to form the Susan we meet. Certainly, she tells us on the book’s opening that she’s built the ‘ideal’ life and she would have been happy for it to continue on as it was.

Had it not been for her mother’s death, the ugliness that comes after. And her unexpected pregnancy, of course.

As much as I love that Haywood allows readers to fall in love with Susan despite (or even, because of) her idiosyncrasies, I also appreciated that she refrains from drawing the other characters as black or white.

Susan expects the worst from her irresponsible brother Edward and he seems intent on meeting her expectations, but we’re given glimpses of his life with their mother – the care he took of her and things he did for her… much of which Susan knew nothing about.

Unlike many people I know, I love books written in the present tense but it’s hard to maintain and I did notice that Haywood occasionally dipped into past tense. Similarly I noted Susan occasionally spoke to we readers… moving into second person voice. It’s something I don’t mind and certainly allows us to feel like we’re privy to our character’s innermost thoughts, but disconcerting if it comes and goes a little.

The Cactus by Sarah Haywood was published in Australia by Hachette and now available.