For reasons unknown this book wasn’t on my radar when it was released in Australia in 2016. Like many I’d loved Graeme Simsion’s The Rosie Project, but was not quite as enamoured with the sequel, The Rosie Effect.

It wasn’t until I mentioned I had an electronic copy of this book that a friend commented that she’d read it last year. And she wasn’t a fan, which made me a tad reticent. As it happens, I can understand her antipathy but enjoyed elements of the book nonetheless…


On the cusp of turning fifty, Adam Sharp likes his life. He’s happy with his partner Claire, he excels in music trivia at quiz night at the local pub, he looks after his mother, and he does the occasional consulting job in IT.

But he can never quite shake off his nostalgia for what might have been: his blazing affair more than twenty years ago with an intelligent and strong-willed actress named Angelina Brown who taught him for the first time what it means to find—and then lose—love. How different might his life have been if he hadn’t let her walk away?

And then, out of nowhere, from the other side of the world, Angelina gets in touch. What does she want? Does Adam dare to live dangerously?

There’s something I really enjoy about Simsion’s writing. He’s able to invoke a warmth or sense of familiarity which reels me in. And it’s not just the tone, but something about his conversational first-person prose that make us stop and listen. (Well, read.)

And I very much enjoyed the first half of this book which mostly unfolds 22 years earlier but is written in the present.

I know the old ‘lost love’ or ‘unrequited love’ thing can be a bit cliched…. and Simsion, through Adam talks about reconnecting with school friends at a reunion and the fact these girls who once thought they were too good for him at school, are divorcees / again-single women who (now) seem enough to start something, which is something I hear about quite often.

I have to admit I’ve pondered a little on my ‘first love’ of late. Not because I’m still single and the ‘what if’ question is confronting…. but more that I regularly travel to his former hometown and past the site of one of our early dates. I’d just turned 16 at the time was mostly scared shitless about the whole thing (and dealing with some other crap); eventually pulling away after several months. I ran into him on and off for a few years and – though I didn’t pursue anything – was a tad interested but figured it wasn’t meant to be and moved on. 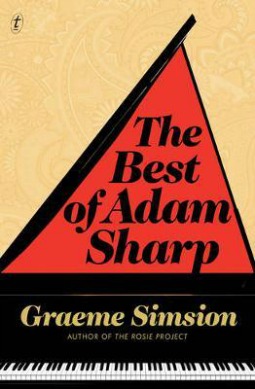 So I kinda got the whole ‘what if’ element of this book – although it’s interesting that we’re later reminded that our memories can be very selective. And I have experience with someone I’d hyped up in my memories who wasn’t the person I’d thought when we caught up at a later date.

I could also relate to Adam… who in the now, is living the dream: working part-time, supporting his mum, spending time with his partner and listening to music. “I had asked myself what I wanted from life, what sort of lifestyle,” he says. Until something (or someone) forces us to question that.

For me this book turned a little once Adam heads to France to spend time with Angelina and her husband Charlie which was all a little far-fetched. The book moved from something offering a message, to something a bit farcical. And it annoyed me.

However… the book was not a total disappointment as I was reminded of Simsion’s talent as a storyteller and writer.

Music lovers will adore the constant references to music and bands throughout the book (which includes 3-4 pages of musical references at the end). Adam’s passion – one inherited from his father – is a love of music (and piano) and interestingly he doesn’t see it as a vocation. (Something this wanna-be writer found interesting.)

The young Angelina suggested Adam not pursuing music (as a profession) was a sign of his inability to take risks. He didn’t.

“I don’t want to be a full-time musician. I get to play piano all I want. If I played piano all the time I’d probably get bored with it. The way it is now, I love it. Is there a problem with that?” pp 72-73

Although I was reeled in by our characters, the plot and Simsion’s writing in the early stages of this book, I was really left with only the latter by the time it reached its conclusion… it was still – however – worth the read for that and some of the underlying reminders of the way we look upon our earlier years as middle and old age come upon us.

These days I was taking more from my bank of memories than I was putting in.

The day might come when I had nothing but memories, and the choice of whether to indulge my romantic side and wallow in them, or my cynical side and reflect on their reliability. p 2

The Best of Adam Sharp by Graeme Simsion was released by St Martin’s Press and is now available.