In my weekly wrap-up I dropped a bombshell on my many MANY fans by sharing the deeply-buried secret that I was once a fan of spy and espionage novels.*

Yep, in addition to crime fiction, mysteries and suspense I once devoured ANYTHING written by Robert Ludlum, David Morrell, Len Deighton and John LeCarre. In fact back-in-the-day I had almost everything Ludlum and Morrell had written. Of course anything new by the former was made impossible by his passing in 2001 and I have to admit I’ve not liked any of Morrell’s recent releases. So… somehow my tastes just drifted.

However, I was reminded of this sordid past when I received Gayle Lynds’ The Assassin. I’d actually not heard of Lynds, but discovered she’s very popular on the (fictional) thriller and espionage scene. Indeed, it seems she knows her stuff as her bio makes mention of her involvement in US Government Think-Tanks and the like.

Recently retired from US military intelligence, Judd Ryder is walking home one evening when he sees a man wearing his clothes step out of his house. Moments later, the man is killed in a hit-and-run. Was the stranger the intended victim, or was it Judd himself?

Searching the man, Judd finds a phone with only one number dialled – to CIA trainee Eva Blake, Judd’s former girlfriend. What Judd and Eva don’t know is that they’ve unwittingly been trapped in a battle to the death against six professional assassins, and only one will be left standing..

I often use the official back cover blurbs cos they offer a good summary of the novel without giving too much away. Sometimes however I feel I can do a better job and I write my own recap; other times it’s a hybrid—and this is one of those times.

The most interesting part of this for me involved the original six assassins (all the ‘best of the best’) who become the target of someone who knows WAY too much about their pasts and may well be after something they thought was useless (and had long forgotten). 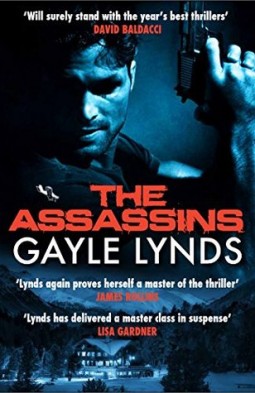 I enjoyed this latest novel from Lynds. I hadn’t realised it was the second in a series and we’d had a chance to meet Judd and Eva before so now I want to go back and read its predecessor (The Book of Spies).

I have to admit I was a bit surprised at how familiar the whole espionage thing was—with clean-up teams appearing to get rid of the evidence of mini massacres and government bureaucracy being sneakily avoided when necessary. #likeridingabike

Of course the players have changed since my previous foray into the genre. We’re no longer dealing with the Russians or Eastern Europe. It all kinda comes down to Iran and Iraq and the Middle East.

As an aside, and I have the same thoughts when I watch NCIS LA (etc), I wonder who we’ll be up against in a few years time. North Korea? Or will international attention be on burgeoning criminal cadres in small Eastern European countries?

And while I’m making confessions I have to admit I have minimal interest in the intricacies of the power struggle in Iraq and Iran. Indeed I’ve wondered previously if this was of more interest to US readers or those with vested interest in the area, rather than we Aussies—far removed (geographically) from the action. Of course it could just be me. 😉 Either way, I skimmed much of the chapters about the political system in Iraq—though was of course interested in the role it played in Lynds’ unfolding plot.

In yet another aside, I recall zoning out during some of the extensive detail provided by the likes of Le Carre, Morrell and Ludlum about Asian Triads or the KGB and intricacies of the history of the swiss banking system, nuclear weapons or arms deals or similar.

The novel was well-paced and I was keen to understand who was after the assassins and why, expecting a few twists and turns.

And I really enjoyed the characters, though probably liked a couple of the secondary characters (CIA agent Tucker Anderson and assassin, The Carnivore) as much as Eva and Judd, and feel relieved they obviously featured in The Book of Spies and will undoubtedly appear in the next in the series.

I’m not sure that I’m entirely ready to re-launch myself into the world of spies and assassins but I did enjoy dipping my toe back into the waters!

The Assassins by Gayle Lynds was released by Allen & Unwin on 26 August 2015.

* So this may have been less of a bombshell than my usual over-share, and the many fans are just those few bored enough to read my blog post.