I knew little about this book going into it. I knew of Melina Marchetta’s young adult fiction – although I haven’t read Saving Francesca, On the Jellicoe Road or Looking for Alibrandi – I’ve certainly heard of them and seen the popular Australian movie based on the latter.

But Tell the Truth, Shame the Devil sounded very different to her past work. It’s targeted at adults, for a start. But it’s also more ‘my’ sort of book if that makes sense: a mystery to be solved; secrets to be uncovered. And it didn’t disappoint on either count.


Chief Inspector Bish Ortley of the London Met, divorced and still grieving the death of his son, has been drowning his anger in Scotch.

Something has to give, and he’s no sooner suspended from the force than a busload of British students is subject to a deadly bomb attack across the Channel. Bish’s daughter is one of those on board.

Also on the bus is Violette LeBrac. Raised in Australia, Violette has a troubled background. Thirteen years ago her grandfather bombed a London supermarket, killing dozens of people. Her mother, Noor, is serving a life sentence in connection with the incident. But before Violette’s part in the French tragedy can be established, she disappears.

Bish, who was involved in Noor LeBrac’s arrest, is now compelled to question everything that happened back then. And the more he delves into the lives of the family he helped put away, the more he realises that truth wears many colours.

Although Bish is the central character in this novel, Marchetta’s young adult-writing voice prowess is on show via Bish’s daughter Bee. Their relationship is a complicated one and Bee lives with Bish’s pregnant ex-wife and new husband. Mostly though he – and Bee – still struggle with the death of their son / brother; neither able to talk to the other about their loss.

Bish becomes embroiled in the investigation into the attack, co-opted by an old school chum (as they say in England. I think) who seems to work for the Home Secretary.

Because Bish’s on the scene near Calais early he finds himself liaising with the French police and parents of children on the bus. And – once Violette and Eddie go missing – his old school chum believes Bish is perfectly positioned to pick the brains of the passengers and their parents to see what else they might know. 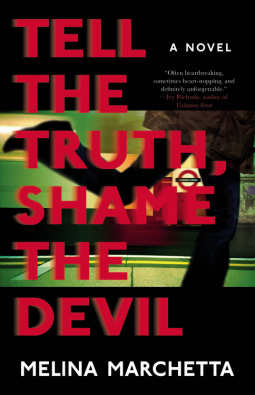 It’s assumed – given Violette’s family connection – she set the bomb or was (perhaps) the target. Bish finds himself leaning towards the latter and given his brief role in her mother’s case, he’s surprisingly worried about Violette’s safety.

His investigation into the bomb attack on the bus also requires Bish to consider the incident which incarcerated Noor a dozen or so years earlier.

Despite his recent failings, Bish is a fair man and not eager to assume the worst of Violette. Or her mother, despite her confession and family ties. Cultural, racist and religious assumptions from those around him also have Bish pondering his own not-hidden but un-discussed heritage.

Interestingly, although there’s reference to Australia (Violette’s living there with her paternal grandparents) this novel is set in Europe and Marchetta’s either done her research or knows the areas well as there are a lot of specifics on offer as Bish travels across London and into France for the investigation. As an aside, but in that vein, when I imagine it on the screen, I see it more as a BBC production than something coming out of Australia.

I liked Bish and his demons and appreciated the involvement of his mother Saffron – the former wife of a diplomat; and the inclusion of his ex-wife and her new husband. Bee featured strongly along with some other young people involved in the incident and we also spend some time with Violette and Eddie.

Marchetta’s characters are complex and felt very real. And they had their secrets. Some of which are important to Bish’s investigation; some of which aren’t.

There’s a contemporary feel to the book as Marchetta has Bish searching social media for clues and information and we’re reminded of the positives and negatives of the online and constantly-connected world.

Marchetta crosses seamlessly into adult fiction with this novel. While reading  I wondered if it might become part of a series and decided I would be more than happy to meet Bish again, but suspect that won’t be the case.

Tell the Truth, Shame the Devil by Melina Marchetta was published in Australia by Penguin Books and in the US by Mulholland Books.

I received electronic copies of this novel via NetGalley from the publishers for review purposes.

Are you a Melina Marchetta fan? I note Gayle Forman also recently (successfully) wrote her first book for adults. It’s interesting to see authors broadening their audiences. Don’t you think?