I’m not much of a cook. For a Cook. Hee hee… see that play on words? Yes? Cos my last name’s Cook? Oh okay… so, not funny then. #whatevs

But it’s true. I don’t mind cooking for me as long as it’s something simple, but that’s about the extent of it. I’m the target audience for those 4-Ingredient cookbooks cos my eyes glaze over if I see things requiring me to visit a grocery store. Or separate eggs.

Discover the spectacular natural diversity of the north of Australia, from Broome to Byron, with two of Australia's favourite food lovers and cooks, and enjoy 80 amazing recipes inspired by local growers and food producers.

Along with Gigi, an intrepid vintage VW Beetle, MasterChef stars Dan Churchill and Hayden Quinn travel from the west coast, to the north, and then to the east coast of Australia to explore what's cooking and the incredible produce of each spectacular region -- and being surfer dudes, to catch some waves too!

In this full colour, 240-page cooking and travel extravaganza, cook with Dan and Hayden's inspiring recipes and enjoy the colour, life and tastes that the west, north and east of our great country has to offer.

From Shark Bay thorugh to Wooramel, Carnarvon, Exmouth and Broome in Western Australia, to Kununurra and Katherine in the Northern Territory, to Cairns and Townsville, The Whitsundays and Bundaberg in Queensland, and finally Noosa Toowoomba and Bryon Bay in New South Wales, their journey is showcased with stunning photography of each lush location and the mouthwatering produce and recipes they discover and cook with along the way.

In association with the ABC, the television series of Surfing the Menu will be aired in early 2016. The first two series introduced us to Curtis Stone and Ben O’Donoghue, and now it’s time to hit the surfing trail again with a new generation of food lovers and cooks – Dan Churchill and Hayden Quinn.

I can however appreciate GORGEOUS cookbooks and this new release, Surfing the Menu, is stunning. It’s a massive hard-cover thing full of recipes and pictures of the pair’s travels around half of Australia.

And the recipes on offer vary from Blue Swimmer Crab Nachos to Wild Wicked Watercress Juice to Jalapeno Ponzu Pearl Meat Ceviche (and not, I’m not entirely what that is, but the picture’s pretty). To name just a few of the delights included in the book.

Because I’m kind and generous and nice and kind (etcetera) I’m actually giving away this gorgeous hard-cover cookbook to one lucky reader. 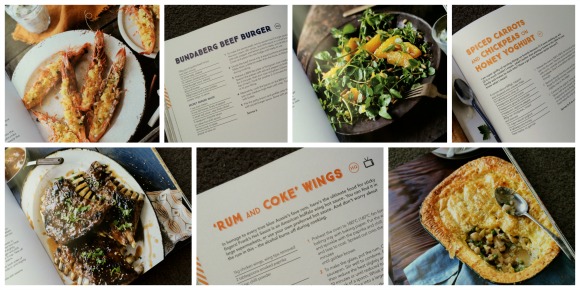 And all you have to do to win it is offer up your first born child and follow Debbish on Facebook.

Actually, no… that’s not true. 🙂 *ahem* All you need to do is leave a comment below and I will use one of those random number generator things to choose a winner. Randomly.

Until it leaves my hot little hands however I will be attempting a recipe or two which I’ll share on Instagram, Facebook and Twitter. It will most likely be a disaster, but good for a laugh nonetheless! I figure the Chorizo and Bacon Breakfast Burrito might be first up!

This competition has now closed!