When I mentioned on Facebook that I’d started Storm Clouds by Bronwyn Parry one of my friends (whose taste I trust) told me she was a huge fan and had read all of Parry’s previous work.

I’ve already confessed that I’m fairly new to Australian fiction. An avid reader, I pretty much only read international authors until the last year or so. 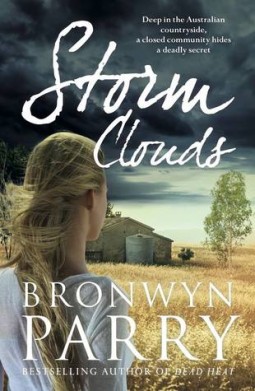 I’ve said before that it’s possibly because I read to ‘escape’ and assumed one couldn’t do that if reading about places which seem familiar.

However… I seem to be getting over that strange idiosyncrasy and several of my favourite books last year were written by Aussie authors.

Although I rarely read straight ‘romance’ I enjoy the romantic suspense genre. In fact some of my favourite authors are those who get the balance right – Suzanne Brockmann, Sandra Brown and Karen Rose (to name just a few). Which is a long-winded way of saying that I’m excited to have belatedly discovered Parry as she really nails that balance in Storm Clouds.

When we meet National Parks ranger Erin Taylor she’s exhausted. In the absence of one injured but recovering colleague and another (also an army reservist) who’s mysteriously disappeared, Erin’s been carrying the load of her team.

So when Simon Kennedy returns from his secretive stint with the army reserve, Erin’s happy and not just because it will lighten her workload. Apparently they’ve been skirting around some sexual tension so Erin’s hoping romance will blossom between the two and doesn’t quite understand why Simon’s held back to date.

She soon discovers that reason however as Simon returns to find his estranged wife’s body in his house. Simon’s never mentioned a wife and quickly becomes the key suspect.

When another body is found however, the net is cast further afield. It’s soon discovered both women were part of an ‘alternative lifestyle’ group which recently settled on the outskirts of town. Simon and Erin – helping the police – also learn the group has many secrets and that its leaders may be more  sinister than many of its members realise.

Parry offers us a broad cast of characters and – I understand – minor characters in one book may feature in her next. Indeed, this book follows on from her 2012 novel Dead Heat  which centred around a local police officer and Erin’s recently-injured colleague. It’s a great approach as it builds a backstory and hooks in we readers. Karen Rose does something similar and I remember mapping out her characters and their relationships years ago when I first discovered her work.

Both Erin and Simon are likeable leads. The plot unfolds from both of their viewpoints so we’re very much privy to their inner thoughts and get to know and understand both characters. The support cast is also well-developed – a visiting police detective was particularly well-drawn in Storm Clouds  and I wonder if he’ll be a focus of future work.

Like Parry’s other work, Storm Clouds  is set in rural Australia and offers insight into our lush but often rugged and unpredictable terrain.

There were a few slightly obvious scenes – ie. the type we all know and love – Simon going gooey over Erin in a dress she made, the will they / won’t they scenes, several characters having unexpected connections and the like; but the novel wasn’t formulaic or predictable. It was an enjoyable read and I look forward to more of Parry’s work.

Storm Clouds by Bronwyn Parry is published by Hachette Australia and available from 13 January 2015.

4/5 from me on Goodreads