My name is Tess Turner – at least, that’s what I’ve always been told.

It never occurred to me that everyone else was lying too. But the words that really hurt weren’t the lies: it was six hundred and seventeen words of truth that turned my world upside down.

Words scare me, the lies and the truth, so I decided to stop using them.

I am Pluto. Silent. Inaccessible. Billions of miles away from everything I thought I knew.

Tessie-T has never really felt she fitted in and after what she read that night on her father’s blog she knows for certain that she never will. How she deals with her discovery makes an entirely riveting, heart-breaking story told through Tess’s eyes as she tries to find her place in the world. 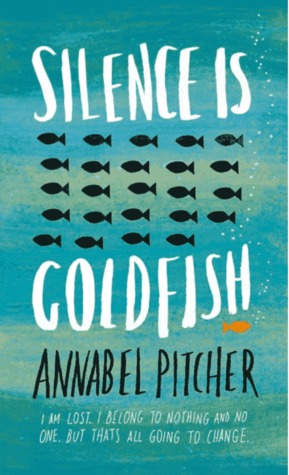 I think I have the maturity of a teenager as this book—and its language—very much appealed to me. In fact I was pretty much hooked from the opening page.

I loved Tess’s voice. I was reminded of course about a post I wrote yonks ago about how I wish I’d had someone to write fabulous dialogue for me when I was a teenager (and I commented on the characters in Buffy and the movies Juno and Easy A). I’m not sure teens (IRL) are ‘ever’ that witty and diabolically droll. But… gee… wouldn’t it have been nice to have been so?!

Tess’s an outcast. After reading the book I read some reviews in Goodreads and noted that some peeps there really disliked her character. I was surprised. I found her endearing. Of course I am much older and could probably sympathise with her a lot. She’s overweight and working really hard not to care. She sees herself as ‘powerful’ instead of fat. But this self confidence often wavers.

She’s a loner but has lied to her parents about her friends. Her dad in particular has been keen on her to ‘fit in’. Although at the same time, values individuality.

Tess is introverted and loves the fact someone once labelled her as ‘Pluto’ —not needing others (planets or people) hovering. I could most certainly relate.

As we learn what Tess has read very early in the novel, I’ll share it here… her father’s blog post mentions the fact that she was conceived via donor sperm and that he struggled (when she was born) to love her as his own.

Tess’s world is rocked. After a half-hearted attempt to run away to find her real father she focuses her efforts on those closer to home. (And yes, I know that doesn’t make sense, but she’s 15, so… #whatevs.)

Tess ‘chooses’ to stop talking after a humiliating public experience and being belittled by ‘the man who calls himself her father’. I actually struggled with her dad’s behaviour for much of the novel. He tried to say the right things —about her lack of friends and her weight—but his frustration would often get the better of him. We get some insight later in the novel however, when her (maternal) grandmother comments on her father’s upbringing.

In case you’re wondering about the goldfish, it takes the form of a torch… something she buys during her runaway attempt. And when she can’t find the words to talk to everyone else, she talks to it. And it talks back. But not really. We’re obviously just privy to her internal self-talk.

There’s something kinda raw about this book and (as an adult) that’s something which really struck me. It touches on a lot of themes—everything from families and relationships, to trust, self-esteem and mental health. Author Annabel Pitcher doesn’t pull any punches. The behaviour of teens and adults are bared in all of their (sometimes) vicious glory.

I noted an Australian bookseller recommending it for children 9-12, but as some of the issues are relatively complex I’d probably be suggesting it target a mid-late teen audience. Pitcher has a beautiful way with words and though understandable to a younger audience, they’d probably be better appreciated by late teens and adults.

Silence is Goldfish by Annabel Pitcher is published by Hachette Australia and now available.